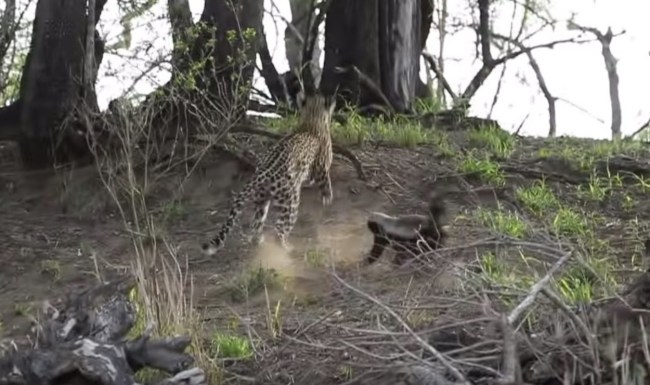 The honey badger is the baddest animal in Africa. I think I speak for a lot of people when saying the honey badger was relatively unknown until a YouTube video 8 or so years ago went viral showing the honey badger do shit like attack jackals, eat one of the most poisonous cobras on the planet, and then just get up and go about his business like nothing happened.

If you’ve never seen that ‘honey badger doesn’t care’ video you REALLY need to watch that ASAP and I’ve got it below at the bottom of this article for you, it’s truly a top-10 all-time YouTube video.

But today we’re here to be reminded of how badass the honey badger is. This clip was filmed at the Sabi Sands Game Reserve in the Greater Kruger National Park. Here we see a leopard, one of the deadliest creatures on the planet and a big cat capable of taking down prey in a matter of seconds.

The leopard has managed to pick off a baby honey badger and is on the cusp of eating the baby when mama honey badger charges in like a bat out of hell, scares the absolute piss out of the leopard, and sends it running for the top of the hill where the leopard’s left to hyperventilate and collect its thoughts after getting punked by a tiny honey badger.

Sahara Wulfsohn is a 28-year-old guide at Kirkmans Kamp in the Sabi Sands Game Reserve and here he describes the insane scene that unfolded in front of them in this clip and he tells us whether or not the baby honey badger actually lived:

I didn’t notice initially, but there was a young honey badger a few meters away from us, and about 10 meters away from the Leopard. When I realized what was about to happen I could hardly believe my eyes!

The Leopard stalked closer and closer till its nose was practically touching the rear end of the Badger. The badger turned around, and im sure got the surprise of its life. The Leopard launched its attack in a fury of claw and tooth with the small badger fighting bravely and valiantly but not really a match for the Leopard, I was filming at this point and then noticed the mother Badger running at speed towards the melee and rapidly displaced the Leopard.

The sighting ended with the mother Badger dragging her large cub by the scruff of the neck into a convenient and nearby hole in a termite mound. The young badger had probably broken its front right leg, but will almost certainly survive thanks to the strength and protection of its mother (via YouTube)

The baby lived! Or at least he’s pretty damn certain it did. These are some of the most creatures on the planet so it’d be shocking if the baby honey badger didn’t make it back from a lil ol’ broken leg.

Now, here’s that original honey badger video from a few years ago that went viral as one of the greatest YouTube clips of all-time. This NEEDS to be watched with the sound on.

After all these years that video still holds up. So good. That guy needs his own show on the BBC.