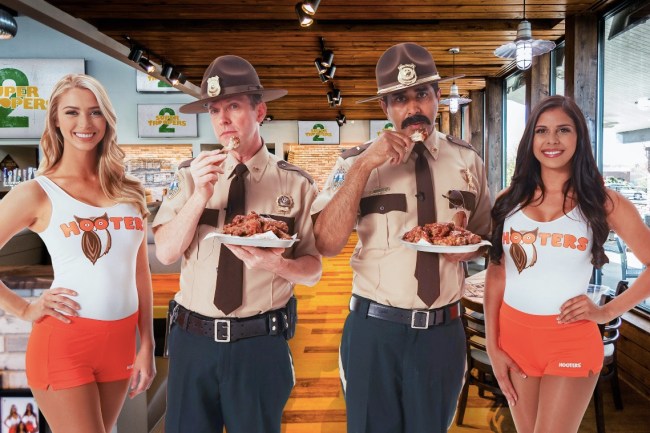 What’s the connection here? You all remember the line from Willy Wonka when they were eating candy off the walls, “the snozzberries taste like snozzberries.” That line was then used in the opening sequence of Super Troopers when Mac and Thorny pull over the stoned college kids and the one dude eats all of the weed and mushrooms before getting tossed in the back of the cruiser….Littering and, littering and, littering and…. 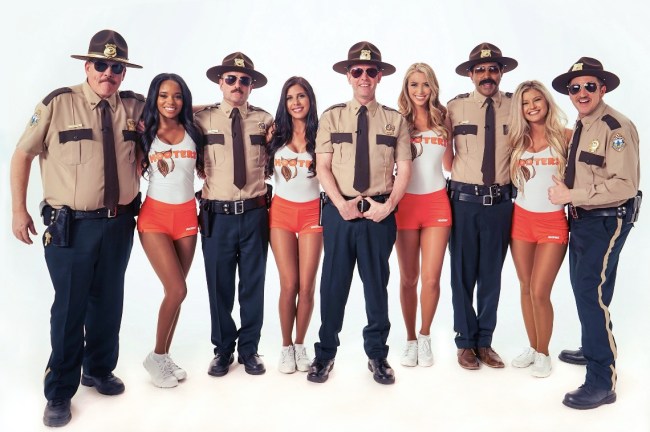 I first heard about this back on the weekend of April 1st and didn’t report this awesome news to you bros because I thought it was an April Fool’s Joke but this is very real, and you’ll soon be able to get the limited edition Snozzberry Sauce at Hooters. There’s also a rumor that members of the Super Troopers 2 cast will be making appearances at Hooters locations throughout the country to surprise diners eating smoked wings with the Snozzberry Sauce:

If you see smoke inside the restaurant – believe it or not – it’s not coming from the cast. Hooters Snozzberry Sauce pairs perfectly with its latest wing innovation, Smoked Wings, which are marinated overnight with a sweet and spicy dry rub before being hickory smoked in-house. Smoked Wings are also half the calories of traditional-style wings, so fans can eat twice as many if the munchies kick in.
For those unable to visit Hooters on April 20, guests that order any style wings with Snozzberry Sauce or Hooters Smoked Wings through DoorDash automatically get free delivery. Plus, you never know, one of America’s favorite troopers may just show up to surprise a fan with an honorary moustache.
The “Super Troopers 2” cast will also be on the lookout for fan reactions using #HootersSnozzberry. As for the taste? The snozzberries taste like snozzberries. (via)

Super Troopers 2 hits theaters on 4/20 and the Snozzberry Sauce from Hooters will only be available in limited quantities on 4/20. This is a one-day-only deal and I fully expect this sauce to grow a larger cult following than the McDonald’s Szechuan Sauce that took the Internet by storm after Rick & Morty talked about it last year in an episode. So if you want to get in on the action just set an alarm to eat at Hooters on Friday.