How Heath Ledger Landed The Joker Role In ‘The Dark Knight’ 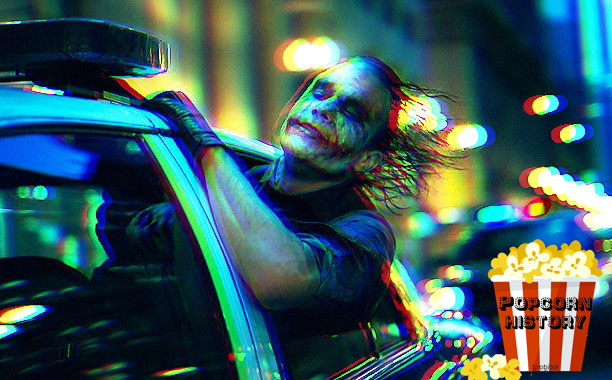 Welcome to the first entry in our new feature series Popcorn History, which will explore the stories behind some of Hollywood’s most iconic films, characters, and stars.

The year is 2005 and The Batman has been saved. Usually not the one who needs recusing, the Caped Crusader found himself — but more importantly, his brand — in the Hollywood gutter, as the magic of Michael Keaton and Tim Burton’s Batman films from 15 years prior had long been washed away by the neon technicolor toxicity of Batman Forever and Batman & Robin. If the Bat were a stock, it was long past time to sell.

Warner Bros., obviously, knew that selling was never an option, as Batman remained, even after the truly disastrous Batman & Robin, one of the most marketable and popular characters in the pop culture world. Plus, given how successful the Spider-Man and X-Men franchises were at the time, the studio knew they’d have to rehabilitate Batman on the big screen sooner rather than later. To do so, in the winter of 2003, they hired Memento director Christopher Nolan to lead them back to the promised land. Two years later, with the release of Batman Begins, that decision would be legitimized, as both the character and the franchise found themselves with new life.

“When I was looking for what to do next, one of the things I heard about was that Warner Bros. were looking to restart Batman,” Nolan told The Guardian in 2005. “After the success of Spider-Man, they felt they ought to get their big guys off the bench. The great part was that they wanted to refresh and invigorate the franchise, but didn’t have any specific concepts and were essentially looking for someone to come in and tell them what to do.”

Naturally, given the success of Batman Begins — and the way the film itself literally ended, with that iconic rooftop chat between Batman and Jim Gordon — a Joker-starring sequel was inevitable.

Part of the reason Nolan was hired by Warner Bros. in the first place was his vision for the character. Prior to the release of Batman Begins, Nolan quite wisely identified that a true Batman origin story had never been done on film, so he was aiming to create exactly that with Batman Begins. As noted in an Empire Magazine article from 2005, Nolan felt the previous films were “exercises in style rather than drama,” and the desire to avoid those trappings is obvious in both the construction of the franchise and the casting of Heath Ledger.

“I don’t even know who was first banging around the term ‘reboot’ or whatever, but it was after Batman Begins, so we didn’t have any kind of reference for that idea of kind of resetting a franchise,” Nolan said. “It was more a thing of, ‘Nobody’s ever made this origin story in this way and treated it as a piece of action filmmaking, a sort of contemporary action blockbuster,'” Nolan once told THR.

When talking about Ledger — who was perhaps best known as the baby-faced lead of Brokeback Mountain — landing the role of the Clown Prince of Crime, much of the post-mortem seems to revolve around the immediate, and expected, outrage from fans. Granted, while the internet was far from the forum we know it to be today, fan culture was still relatively rabid and the response to Ledger’s casting was an exercise in that venomous fandom.

What’s interesting, though, is that fans weren’t alone in their confusion: in the years since, Jonathan Nolan — Christopher Nolan’s brother who helped him pen the script — has admitted that both he and Warner Bros. “didn’t get” Ledger’s casting.

“When I wrote The Dark Knight, Chris [Nolan] had to figure out how we’d tackle the Joker,” Nolan told The Hollywood Reporter. “Chris had a good meeting with Heath Ledger. And no one got it — I didn’t get it, the studio didn’t get it. And the fan community was … we were fucking pilloried for it. “Disaster, worst casting decision ever!” Chris just stuck to his guns. It was a question of not giving the fans what they’re asking for but what they want — which is, “Let’s find a really fuckin’ serious actor, somebody who’s going to come in and just tear this role to pieces.”

Despite raised eyebrows from both his brother and creative partner AND the studio who cuts his checks, Nolan knew Ledger — who beat out the likes of Paul Bettany, Adrien Brody, Steve Carell, and Robin Williams, as they all expressed public interest in the role — was his guy, as he’d been wanting to work with the then-Academy Award-nominated actor for some time, even offering him a role in Batman Begins.

Upon meeting with the charismatic Australian actor, Nolan was sold on Ledger’s vision for the character, which he personally described to the New York Times as a “psychopathic, mass-murdering, schizophrenic clown with zero empathy.” In fact, it was while watching Batman Begins that Ledger realized he had a take on the Joker that could fit within the confines of Nolan’s universe.

“To be honest, I don’t exactly remember when it [the idea to cast Ledger] came to pass,” Nolan once told IGN.

“I’d met with Heath several times on projects in the past and nothing had ever come of it. And I think he’d heard I was looking for someone to play the Joker before we had a script, and I’d heard that he was really actually into the idea. And we met and we got each other. We both had exactly the same concept in our heads of who that guy would be in this film in the way that we’d interpreted it. It wasn’t specific to, “Oh, he’s going to look like this or talk like that” at all. It was about a psychological concept. It was about a character concept. It was about the threat of anarchy. It was about anarchy being the most frightening thing there is. Chaos and anarchy in this day and age, and I think it is. It’s certainly the thing I’m most afraid of.”

Aaron Eckhart — who starred in the film as Gotham City district attorney Harvey Dent — recalls both cast and crew being blown away with Ledger during reherals, as everyone in the room, including the esteemed likes of Gary Oldman,  knew he was creating “something special”:

“I remember going into rehearsal with Chris and Heath was finishing his rehearsal with Chris, and Chris looked at me and he said, ‘Heath is doing something special,’” Eckhart told CBS Sports Radio. “And we all felt that way. We felt like we were watching a really special performance, a guy who took his role – and who got his role a year before the movie started. That’s how much he wanted it. He really went after it, and he proved himself. When you have Gary Oldman, who’s one of our greatest actors, and he’s in awe of what Heath was doing, it showed what a performance Heath was giving.”

Oldman wasn’t the only beloved English actor to be awestruck by Ledger’s creation, as the legendary Michael Caine famously forgot his lines when he was confronted with a fully-costumed Joker for the first time during the filming of the fundraising party scene.

That sense of terrified awe would be replicated by the masses, as every emotion that Nolan and Eckhart and Oldman went through on-set translated to the film itself, as Ledger’s Joker would eventually go on to become a singular representation of evil. Even to this day, 13 years later, Ledger is unrecognizable under just a thin layer of white face paint, as his Joker is a living, breathing character, a personification of chaos, unto himself.

Following his death, Ledger’s portrayal of Joker would only become further immortalized, as he’d go on to become the first actor to win a posthumous Academy Award since Peter Finch for his work in 1971’s Network. Not only that, but his win for Best Supporting Actor also marked the first time that a comic book movie had been recognized at such an esteemed critical level.

Over a decade later, Ledger’s untimely death still strikes a deep chord amongst the entertainment community, as he was not only uniquely talented, but he was still desperately young: Ledger was just 28-years-old when he died. To put that into perspective, Leonardo DiCaprio didn’t win his first Academy Award until he was 40. By that logic, Ledger was still barely scratching the surface of his prime.

Still, despite the pain of his passing, there’s solace in knowing how solidified his legacy is: The Dark Knight is, and will forever be, considered one of the greatest films of all-time, and that status is largely built on the back of Ledger’s astounding work. And just like the neverending battle between Batman and Joker, Ledger’s destiny of being a cinematic icon is one that will last forever.