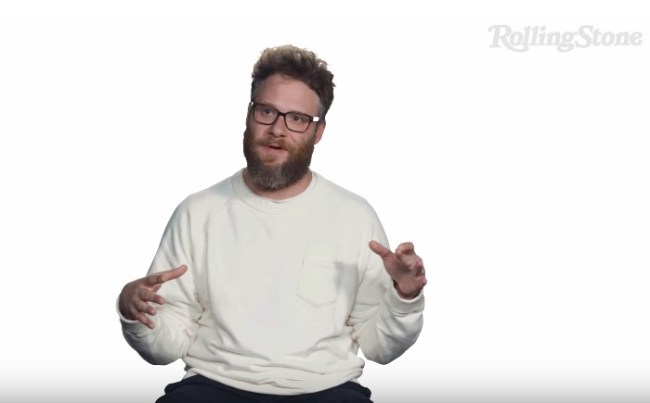 If you’re like me and you don’t live in Los Angeles, it’s weird to think about how there are neighborhoods were the biggest celebrities in the world are just casually neighbors and play basketball in the driveway like some kids from Indiana.

On a quick YouTube clip yesterday for Rolling Stone, Seth Rogen ran through their ‘First Time’ segment where he talks about the first time he did things. His first story is about meeting Kanye West after moving to a new neighborhood in Los Angeles and everything about this story is perfect because as someone who’s never met Kanye this is EXACTLY how I imagine everyone in the world meets Kanye:

I lived in SoHo (lower Manhattan) for 4 years and would run into celebrities (including Kanye) all the time but it’s not like LA, and nothing like Seth Rogen’s story. I’d mostly pass them on the sidewalk while walking to work, or in the case of Kanye I was a member of a private dog park on Houston St. that was directly across the street from Kim and Kanye’s condo so I’d see them coming in and out of their building all the time surrounded by a complete shit show of paparazzi.

The New York equivalent of Seth’s story would’ve been if I saw like Jared Leto knocking on my neighbor’s door to see if he wanted to go spray some graffiti, or if Joe Jonas was buzzing into someone’s building to see if they wanted to go to SoulCycle or some shit like that. There’s just no equivalent to life like this outside of Los Angeles (or The Hamptons). L.A.’s weird.

Also, I’d just like to point out that it’s super chill to hook on of his fans up yesterday with an Oz on Twitter: