How To Handle Police If You Get Pulled Over With Weed 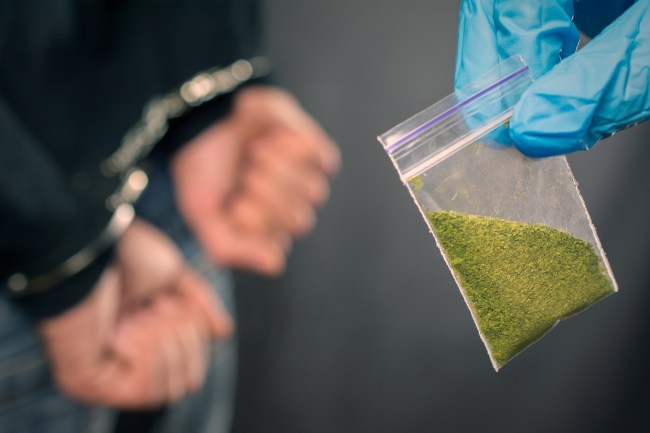 Although marijuana for adults 21 and older is now legal in 11 states, that doesn’t mean it’s all of a sudden time to stop worrying about the cops. Make no mistake about it, while the laws surrounding pot possession are starting to loosen up in some parts of the country, law enforcement is still out there sniffing around like bloodhounds trying to take as many people to jail as they can over a little weed.

Well, here’s something to consider. Law enforcement agencies nationwide locked up somewhere around 659,700 pot offenders in 2018, according to the most recent FBI Crime Report. No, that doesn’t mean that every one of these arrests led to a conviction or a prison sentence, but it still means they were cuffed, taken downtown and tossed in a jail cell with child molesters and petty thugs while waiting for a judge to sort it out. We only mention this because now that weed is readily available to more Americans, there is more temptation to smuggle it back to states where it is still considered a no-no. And that, we assure you, is where the cops are hanging out just hoping like all-be-damned to nail your ass to the wall for a drug-related offense.

Listen, we’re not here to tell you that you shouldn’t bring home a souvenir after visiting a state where weed is legal. Hell, what fun would that be? No, we’re writing this to give you some tricks, tips and pointers on how to evade the police when you do it. That’s right, it’s Outlaw 101, baby, and class is in session. So, sit back and take in as much information as possible, and hopefully you will not be one of the hundreds of thousands of people the cops will catch with weed this year.

For starters, it is essential to understand that, right or wrong, police are out there stereotyping motorists like a motherfucker. Let’s just say that you and a couple of your Indiana bros hop in a car and take a short drive across the border to Illinois to purchase legal weed. But the only vehicle at your disposal is a junked up 1992 Chevy Berretta, all decked out with Phish window stickers and one on the bumper that reads, “It’s 4:20 Somewhere,” your chances of a roadside shakedown are pretty good. And you had better believe the cops are going to turn the dogs loose on your ass if given the opportunity.

So, if you plan to transport any pot products into an area of prohibition, don’t fly your stoner flag too high. Find a respectable-looking vehicle for your travels, preferably one that is free of hippy décor or anything else that screams, “Hey copper, we just bought a shit ton of weed, come and get us.” It is also well-advised that you break only one law at a time. If you and your crew are smuggling a couple of ounces back home, a place where the law dictates that offenders go to prison for this sort of thing, you’re going to want to obey the traffic laws to a T — all of them. That means absolutely no speeding, no crossing over the center line and always using the turn signal before changing lanes. Think about how the average dad might drive while taking his family on vacation. That’s where you need to be – super safe and boring. Because it is well known that police bordering legal marijuana states are watching for motorists to screw the pooch for just any old thing so they can pull them over and launch an inquisition. And if they suspect you’re holding weed, the situation is bound to get ugly really fast. It goes without saying that we don’t want to give them any reason to mess with us in the first place. But if they do, and they very well might, your next move is going to mean the difference between driving away or going to jail.

Understand, the police do not have the right to search your vehicle for no reason at all. A lot of folks think, “It’s the police, they can do whatever they want,” but that simply isn’t the case. Law enforcement agencies typically need a search warrant before they can start ripping a person’s vehicle to pieces on a quest for illegal drugs. But before they get a warrant, they must either see or smell something to support their suspicion. It’s for this reason that motorists shouldn’t smoke weed in their vehicles, and they should always keep pot products and paraphernalia tucked away somewhere out of sight. If you are on prescription medications for any reason – even something like antibiotics – make sure those pill bottles are hidden, as well. It might sound overly paranoid to go to such lengths. But we don’t want to give an officer any reason to start asking too many questions.

It also wouldn’t hurt if the interior of the vehicle was spotless. It is difficult for cops to establish probable cause for a search when they stumble onto a ride that looks like it was just driven off the showroom. So get rid of all those fast food bags on the floorboard and that pile of laundry in the backseat. Make the inside of your car or truck as neat and presentable as possible. For some reason, this gives off the illusion that a motorist is an upstanding citizen and not a drug mule.

Law enforcement officers cannot go on gut feeling alone when trying to initiate a search. The 4th Amendment protects us from these types of Gestapo tactics. They need more. Not much more, but at least something that suggests illegal activity might be going down. This doesn’t mean that they won’t try to persuade a motorist to let them take a look around. They most certainly will. The officer might even act nice about it, giving the motorist a sense that they’re really not out for blood. But believe it, these fools want nothing more than to catch you doing something wrong. On the plus side, they are going to need your permission first before they start sniffing around. No matter what, do not give it to them. Repeat after me: I do not consent to searches.

Police: Do you mind if I search your vehicle?

Motorist: Officer, I do not consent to searches.

Police: No? Well, maybe that means you’ve got something to hide.

Motorist: Officer, am I being detained, or am I free to go?

If a cop has a reason to detain you based on suspicion of a crime, you’ll find yourself sitting in the back of his cruiser in handcuffs rather fast. But if they’re just doing some snooping around, the above spiel will show them that you understand your rights and they will eventually get tired of playing games. Just keep repeating the script and you and your weed will soon be on your way. Granted, you might have to clean your shorts afterward, but you won’t be doing it in jail.