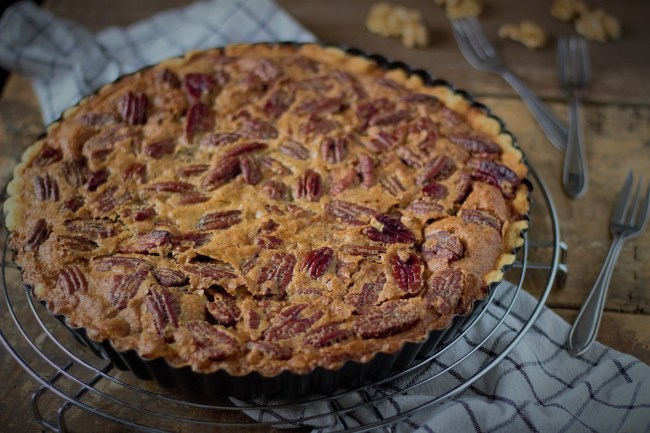 I grew up in Southwest Florida in a region that some linguists to be close to what’s considered ‘accent neutral’ which basically means there’s no heavy accent in the area’s population like a Southern or Midwest accent. I say this because I grew up pronouncing Pecan Pie as ‘Pea-Can Pie’ and was surprised when just a few years ago my oldest uncle chastised me for pronouncing it that way and said the only acceptable pronunciation is ‘Puh-Con Pie’.

Somehow I’d managed to make it through life all the way to adulthood without anyone correcting my ‘pecan’ pronunciation or even making me aware of a debate around the pronunciation but suddenly it was as if the curtains were pulled back and I realized there was a world split on the proper way to say pecan’.

With Thanksgiving just a few days away, the American Pecan Council ran a nationwide vote of over 347,000 Americans on the proper way to pronounce ‘pecan’ with a winner-take-all conclusion. Alas, we now know the proper way to say ‘pecan’ and it turns out I’ll have to change my old ways.

With 50.54% of the 347,000 vote, ‘Puh-Con’ is now the official way to pronouncing ‘Pecan Pie’. It’s astonishing how close the total vote was with that many voters. 49.46% voted for ‘pea-can’ but they lost and at the very least those ‘pea-can’ voters will have to accept the results of this election until the next round.

For anyone who is feeling the voting spirit, we’re running a Thanksgiving Food Showdown to determine the best food(s) of the holiday. You can hit our Twitter poll in the tweet thread below to weight-in and vote for your favorites:

We're tasking you with picking the holiday's best food over the course of the next two weeks. Will your favorite dish survive and advance??

Vote for your winners below 🗳⤵️ pic.twitter.com/5ZYKk4JSZu

By the way, the perfect Thanksgiving meal is Turkey (white and dark meat), Stuffing, Mashed Potatoes and Gravy, and Pumpkin Pie for dessert. Everything else is up for debate but those are the necessary staples. Pecan Pie is always welcome in my house but I’m still going for the homemade Pumpkin Pie first. Likewise, I’m in charge of smoking a ham every year but I’m still grabbing turkey before the game.