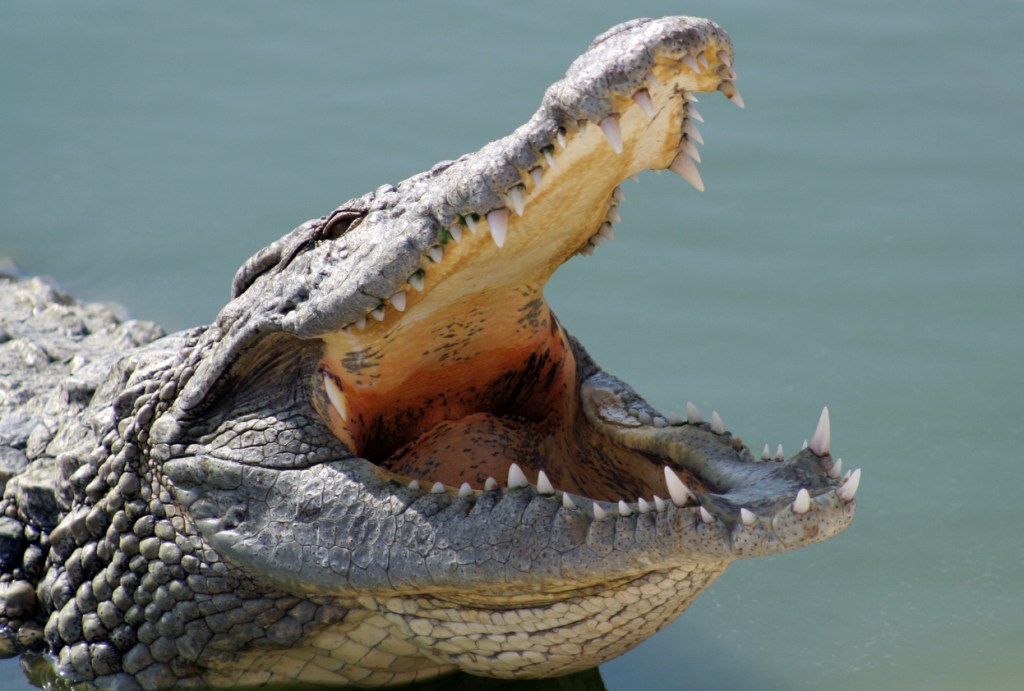 It’s not every day you see a massive crocodile named ‘Boofhead’ eat a bull shark like a pretzel, but here we are.

A fisherman by the name of Dan Johnson was fishing near Proserpine which is inland of Airlie Beach in North Queensland, Australia. Mr. Johnson was out there with his daughter and dog fishing from the bank when he felt something big pull on his line.

He estimated it was a 3.3-foot bull shark (1 meter) which seems about right based on the footage, it’s definitely not a massive bull shark. But after reeling in the shark for a little bit he caught sight of Boofhead, a crocodile that’s so massive it’s referred to as a ‘local celebrity’ in that area.

Well, Boofhead makes a straight line for the shark and Dan Johnson cuts the fishing line to try and release the bull shark. But by that point, the shark was stuck on the bank and made for an incredibly easy snack. This footage has been picked up all over Australia in the past 24 hours and is now going viral across the world.

A Proserpine angler caught more than he bargained for after accidentally luring a famous local croc. The four metre saltie known as 'Boofhead' spotted a bull shark on the end of the line, and couldn't resist stealing the snack. https://t.co/b2rkakPwmk @SamiBarnes7 #7NEWS pic.twitter.com/4rQindX9NK

He had this to say about the video:

“He’s a bit of a celebrity. This crocodile is always there but it’s not often it takes a fish from you when you’re fishing. I was just sitting there having a fish. I hooked a shark and heard a lot of commotion on the right hand side of me, and I thought they were saying ‘good job you’ve hooked a good fish’ when they were saying ‘look out’, and then by the time I saw what was going on the croc was coming this way. I thought ‘uh oh’ this is bad.”

The crocodile is estimated at 4 meters which puts it over 13-feet in length. In the video’s caption, Daniel Johson asks for everyone to avoid feeding their local celebrity Boofhead. That sort of behavior can cause crocodiles to become overly familiar with people and rely on them for food. This can mean that anytime someone shows up to fish, the croc thinks it’s a chance for an easy meal.

It kind of reminds me of this, a video from my friend Jimmy who owns Everglades Fishing Co. He was reeling in a shark when a massive Goliath Grouper swallowed the shark:

Dan Johnson told 9News “He was just cruising. You look at that and think, if you’re in the water, you can’t outswim that animal. You see how fast they are when they’re not even trying.” which is a VERY valid point. Those crocs glide so fast through the water without trying. If they exerted any proper effort they might catch a boat.