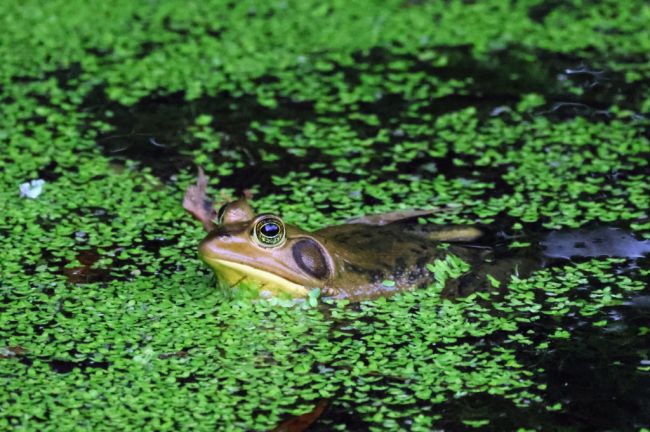 A band of timber mill employees were hunting wild pigs on the Solomon Islands last month and stumbled across the D.K. Metcalf of frogs. Described as being the size of a human baby, mill owner Jimmy Hugo shared a photo of the frog on Facebook. It’s enormous.

Hugo refers to the capture as “bush chicken,” in reference to the Islands affinity for serving the frog as a meal, which could serve a feast for 50 people at that size. Jodi Rowley, the curator of amphibian and reptile conservation biology at the Australian Museum, told the Australian Geographic that she has never seen a frog that big.

This particular species is known as the Shortland Island webbed frog, or the giant webbed frog, and is known in scientific terms as the Cornufer Guppyi.

They are the largest aquatic frog in the Solomon Islands and Melanesia, and can grow to more than two feet. Among the largest in the entire world, if there is a frog that is bigger, I need to see it to believe it.

The enormous amphibians are toward the top of the food chain, and firmly hold the top spot for frogs in the region. Despite their predatory ways, the Cornufer Guppyis are facing extinction dead in the face as habitat loss, decreased water quality and pollution threaten their existence. Thus, they are rarely seen anymore.

Hugo said that the frog was so massive, he could just walk up and pet it like a dog. They millers brought it back to their home base and probably served up a pretty hearty meal.

If you came across a frog that size, what would you do? I think I would freeze up. Less so from fear (a little fear) but mostly from pure amazement.