WHOA: Humpback Whale Takes Diver Under Its Pectoral Fin To Protect It From A Nearby Tiger Shark 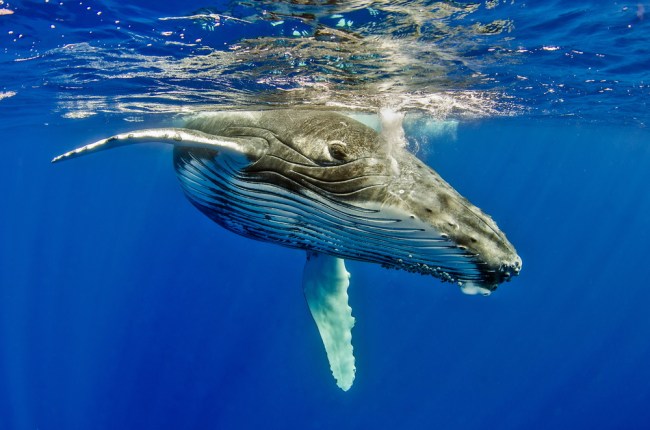 This is some of the most surreal whale-encounter footage you’re ever going to see. This footage has gone viral over the past 24 hours and it shows a diver off Muri Beach in Rarotonga, Cook Islands being protected by a humpback whale in incredibly shallow waters because there was a massive Tiger Shark in the area. While we never explicitly see the Tiger Shark trying to come at the diver, the video ends with other divers emerging from the water and discussing how the enormous shark was dangerously close.

What we do see is this 50,000-pound Humpback Whale taking tenderly taking the diver under its pectoral fin to protect it from the enormous shark in the area. The whale keeps the diver(s) incredibly close the entire time, nudging them along with his beak. This is definitely some of the most peculiar behavior you’re ever going to see under the sea:

via Ryan Brower at Grind TV:

Hauser recently spoke to the Daily Mirror UK about the experience, saying, “I’ve spent 28 years underwater with whales, and have never had a whale so tactile and so insistent on putting me on his head, or belly, or back, or, most of all, trying to tuck me under his huge pectoral fin.”
Hauser was pushed around by the whale for nearly 10 minutes, as the whale also used its head and mouth to keep her away from the shark. The whale even lifts Hauser out of the water at one point. (via)

Nature is awesome, isn’t it? That whale realized the humans were in imminent danger from a prowling Tiger Shark who was likely out there trying to score an easy meal on the reef. Tiger Sharks don’t seek out humans as meals but they’re not very discerning. Meat is meat, right? The massive humpback whale took the diver under his fin to protect it from the nearby shark because the shark isn’t foolish enough to mess with a 50,000-pound creature who could kill the shark with a slap of its tail.