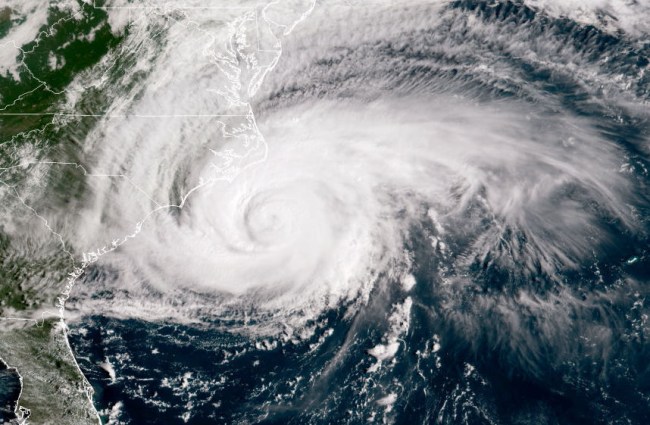 Hurricane Florence officially made landfall last night as it slowly starts to sweep across the Carolinas and it appears the storm is just as vicious as experts predicted it would be.

At this point, it’s still unclear exactly how much damage the storm will do but if the Weather Channel is to be believed things might get very, very out of control.

Over one million people evacuated the shoreline over the past few days but a number of brave souls have stayed behind. However, based on some of the video footage taken from the storm they might have made a huger mistake than Gob ever did on Arrested Development.

Videos of Florence started to trickle out last night and it’s safe to say it’s poised to be as destructive as many people predicted it would be.

Multiple towns have already fallen victim to the storm surge— including New Bern, NC, which went underwater after a river overflowed.

The town of Bellhaven has also suffered a similar fate.

There’s also this wild video of a gas station in Topsail Beach that collapsed after falling victim to the hurricane.

A reporter for CNN tried to withstand the 95 MPH winds but Mother Nature decided to teach him a lesson.

Another CNN correspondent accidentally got the chance to illustrate just how crazy the winds are when they somehow managed to split his microphone cord in two.

“My cord just literally split in two… some duct tape might be helpful,” says CNN’s @JohnBerman, in Wilmington.

However, at least a few people have taken the opportunity to take advantage of the winds to get some massive air while kiteboarding.

SERIOUS AIR: With Hurricane Florence bearing down on the east coast, some used the whipping winds to their advantage—and went kitesurfing https://t.co/aZZcUgx6ez pic.twitter.com/fk3ZGSChSe

We’ve also got some dolphins who seem to be having a pretty good time.

However, nothing tops the footage taken by the NOAA pilots who braved the storm to fly into the eye.

Time-lapse video of a #NOAA WP-3D Hurricane Hunter (#NOAA42) flight into Hurricane #Florence on Sept. 10, 2018. Get the latest on the storm at https://t.co/MlZk25kG0d. Credit: Nick Underwood/NOAA pic.twitter.com/FQ3RJMKVUU

It looks like Florence is going to take her sweet time sweeping across the Carolinas so there’s a good chance things only get worse from here.

Everyone stay safe out there.