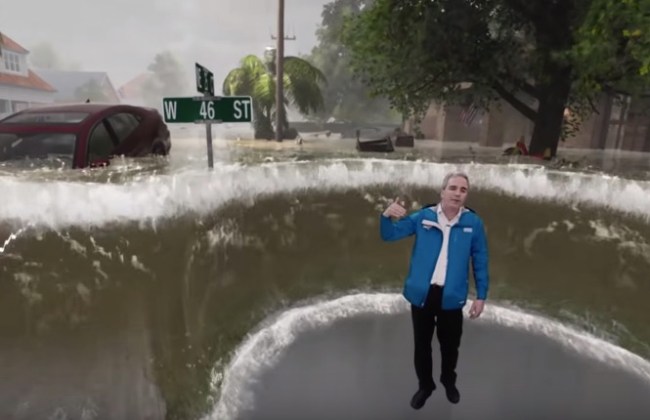 I’m a born and raised Floridian. I lived through Hurricane Andrew and many others whose names I’ve forgotten. This is in no way, shape, or form a brag. My point is that I’ve sat through countless hours of Weather Channel and local news coverage of tropical storms and hurricanes.

My thoughts are with all the North and South Carolinians getting pounded by storm surge and flooding, stuck without electricity right now due to Hurricane Florence. I’ve been awake since around 6am EST watching parts of North Carolina getting crushed by storm surge.

There’s been footage of cars floating in the streets. One town got a 10-foot storm surge. And this was all during low tide and on the front side of the storm. There’s still the back wall of the hurricane to come through which might coincide with high tide around 11am and the storm surge from that could devastate a lot of communities.

Going back to my point about watching countless hours of TV coverage about hurricanes and tropical storms I came across this clip from the Weather Channel last night when scrolling through Twitter and it’s unlike anything I’ve ever seen before when it comes to storm coverage.

They’re estimating that Hurricane Florence could potentially bring a 13-foot storm surge to parts of North Carolina when high tide hits and this graphic illustrates just how life-threatening that can be. They break it down by showing the dangers of storm surge as it rises and this clip looks like some cross between Sharknado and the Weather Channel.

With most of these storms is that there’s always a pretty good chance you don’t live in that exact location that gets the full brunt of the storm. I see this constantly with jaded Floridians who think every storm is just a little bit of wind and rain.

CHECK IT OUT: This Live Feed Of Hurricane Florence From A Webcam In The Ocean Is Very Intense

When officials repeatedly sound the alarms saying ‘get the fuck out this storm is life-threatening’ and then you don’t suffer a direct hit from the storm it makes you less cautious the next time around. We’re in the middle of peak hurricane season. There’s another storm in the Carribean brewing already.

Remember this video. Think about this storm surge graphic.

If you live in a low lying coastal area and are ever in the path of a tropical storm or hurricane then commit this to memory because there’s always going to be another storm. In fact, these storms are only getting more intense year after year.

Stay safe out there, my dudes.