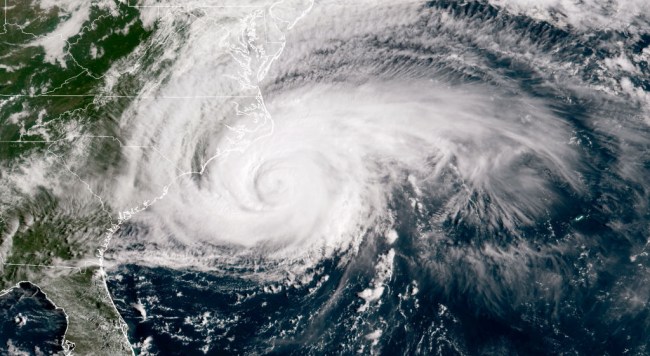 The National Weather Service has called Hurricane Florence a “storm of a lifetime.” The hyperbole in storm-related jargon can get overdramatic at times, but the evidence points to a shitstorm for the coastal Carolinas.

Florence hit Category 2 hurricane strength with maximum sustained winds of 110 mph on Wednesday evening, according to Accuweather. As CNN meteorologist Brandon Miller reports, the storm will travel “literally slower than a walking pace” from late Thursday through early Sunday, which means that the coastal Carolinas will suffer more than 24 hours of hurricane-force winds and storm surge.

The biggest danger, according to the Federal Emergency Management Agency, is the Florence’s storm surge–defined as a wall of seawater that could flood shallow parts of the coast.

A webcam put in the middle of Florence’s projected path is being streamed on the internet for a live feed of the storm. Warning: adjust your volume because the whipping winds are very loud.

Update: I wrote this ^ before the flag was mercilessly ripped from the pole by hurricane winds. Still, U-S-A!

A controversial decision was made by South Carolina officials, who recently announced that they will not be evacuating inmates in at least two prisons inside the evacuation zone. Many people who oppose this decision point to 2005’s Hurricane Katrina, when prison officers reportedly evacuated themselves and left inmates in chest-high waters without food or water for days. According to BBC, Orleans Parish Prison was eventually evacuated four days after the storm hit, but not before the Human Rights Watch claimed that 517 prisoners had gone missing.

We’ll keep you posted as the storm rages on.