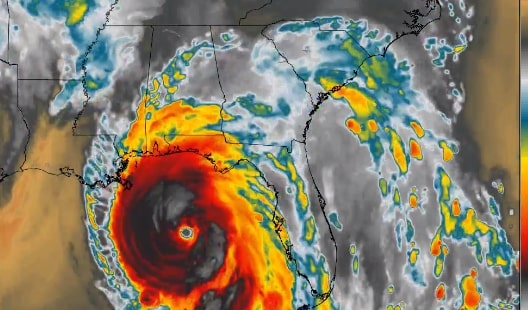 8am Intermediate Advisory from @NHC_Atlantic upgrades #HurricaneMichael into a category 2 hurricane. Keep in mind, wind (which the categories are based on) will NOT be the only impacts with this storm. Expect life-threatening storm surge along much of the Gulf Coast, and more. pic.twitter.com/wuPnEQ9hkE

Hurricane #Michael, seen here by #GOESEast, is strengthening as it moves over the southeastern Gulf of Mexico. The center of the Cat. 2 storm is expected to move inland over the Florida Panhandle on Wednesday. Latest: https://t.co/ZrHnIiaJs1 pic.twitter.com/8oMdOx2YVv

Florida Governor Rick Scott called Hurricane Michael a “monster” storm during a press conference at the Escambia County Emergency Operations Center. “It’s a massive storm,” Scott warned. “We haven’t seen anything like this in the Panhandle in decades.”

“Hurricane Michael is forecasted to be the most destructive storm to hit the Florida panhandle in decades,” says FL Gov. Rick Scott, warning of “torrential rain” and flooding in some areas.https://t.co/7tQ66ECPvM pic.twitter.com/zJqNwnpGyP

“We are expecting an exceptional storm surge.” @dylandreyernbc tracks when and where #HurricaneMichael is expected to make landfall pic.twitter.com/fJ9JUVX53r

“This storm can kill you,” Scott said on Tuesday. “You need to evacuate if you’re ordered to do so.”

"The potential of 12 feet of storm surge in some areas is just deadly," Florida Gov. Rick Scott tells @RobinRoberts on @GMA as #HurricaneMichael continues to strengthen. https://t.co/9eCMTA3krl pic.twitter.com/KG3T0HdEU1

You can get Hurricane Michael forecasts and updates from the State Assistance Information Line (SAIL) 1-800-342-3557.

We have activated the State Assistance Information Line to provide an additional resource for those in FL to receive accurate and up-to-date information regarding Tropical Storm Michael. The SAIL line is 1-800-342-3557. https://t.co/52423e8geL

Michael is expected to make landfall on Wednesday as a major hurricane. The storm will barrel into the Big Bend of Florida with life-threatening, tropical storm force winds and potentially catastrophic storm surges of 12 feet.

“You cannot hide from storm surge,” Scott said at a news conference Tuesday. “Every family must be prepared now. … We can rebuild your house, but we cannot rebuild your life.”

Water levels will rise well in advance of the arrival of #Michael. It's essential that residents within the storm surge warning area finish preparations to protect life and property today. pic.twitter.com/0Xz3nNkAnr

Highest forecast wind gusts from #HurricaneMichael will be in Eastern eyewall as landfall occurs … up to 140 mph gust right along coast.

Even with land friction, entire FL panhandle from Pensacola to Tallahassee including Interstate 10 will see 50-80 mph+ gusts = tree damage. pic.twitter.com/6ZmmLVNAHT

Preparations should be rushed to completion today. #Hurricane #Michael may bring tropical storm force winds to the FL Panhandle as soon as tonight, and will make landfall Wednesday. All the critical details you need to know: https://t.co/EDOV3EA6wk pic.twitter.com/wx8HJPVasp

Here is the danger of the storm surge and flash-flooding.

#Hurricane #Michael could bring life-threatening storm surge to the Florida Panhandle. What does that look like? We're showing you like no one else can: pic.twitter.com/jWbmrF4l5a

Officials warn #HurricaneMichael could be "the most destructive storm to hit the Florida Panhandle in decades." https://t.co/7McS73apk4 pic.twitter.com/09DfJPRwVG

President Donald Trump said his administration is working with state and local officials in Florida “to take all necessary precautions.”

Pres. Trump says his administration is working with state, local Florida officials "to take all necessary precautions" ahead of Hurricane Michael.

"It looks like another big one, but we've handled them well." https://t.co/bmkCy1NxlH pic.twitter.com/CvXs8vXO0w

“Michael could develop into a potentially catastrophic event for the northeastern Gulf Coast,” the National Weather Service office in Tallahassee, Florida stated.

Michael is currently a Category 2 storm with winds of 100 mph but will unleash 111 mph winds when it manifests into a Category 3 hurricane. Tens of thousands of people have been ordered to evacuate the coastline where there are life-threatening winds along the Florida Gulf Coast. Rainfall totals of 4 to 8 inches are forecast from the Florida Panhandle.

#Michael continues to strengthen, and Storm Surge and Hurricane Warnings are in effect for portions of the Florida Gulf Coast. Here are the 10 AM CDT Key Messages for #Michael https://t.co/tW4KeGdBFb pic.twitter.com/gsY3WBa8Rv

#HurricaneMichael
•Cat 2
•100 mph max sustained winds
•395 miles S of Panama City, FL
•Moving NNW at 12 mph
•State of emergency for 35 FL counties
•Mandatory evacuations for 120K+ around Panama City Beach
•Apx 60% of storms that have made landfall in US in Oct have hit FL pic.twitter.com/KmFcMaFCSF

There are warnings for more than 300 miles of coastline and there is a state of emergency in 35 counties. The Federal Emergency Management Agency (FEMA) has mobilized resources to assist with the potential devastation. Scott said 2,500 National Guard soldiers and 350 Florida Highway Patrol Troopers are ready to assist in the emergency.

I have now activated 2,500 @FLGuard troops and the FL Highway Patrol is making nearly 350 troopers available for deployment. They are standing by ready to respond to the storm.

35 troopers from Orlando preparing to head to the panhandle to help Floridians in the wake of hurricane Michael. pic.twitter.com/RKFiA1Xtep

A state of emergency was declared for 92 counties in Georgia.

LATEST on #HurricaneMichael
– State of emergency declared for 92 Ga. counties
– Expected to intensify to Cat. 3 as it nears landfall
– Forecast to move NE into Ga. Wednesday night as tropical storm
– More https://t.co/IN7eM6WQeP pic.twitter.com/yKvudYGtWx

The storm will then go inland and dump heavy rain and strong winds in the Southeast.

Heavy rainfall from #HurricaneMichael will stretch into the Carolinas as well.
6-10"+ at Florida panhandle coast near landfall
2-5"+ widespread along track across Southeast.
Will be a faster moving storm … no stalling with this one! pic.twitter.com/60QLwUp5kO

There is actually another hurricane forming that could follow the same path as Michael.

Looking out into the 6-10d period… some indications for another storm over the Western Caribbean that later tracks into the Gulf of Mexico – similar to the development of Hurricane Michael pic.twitter.com/SA8UquIC1r