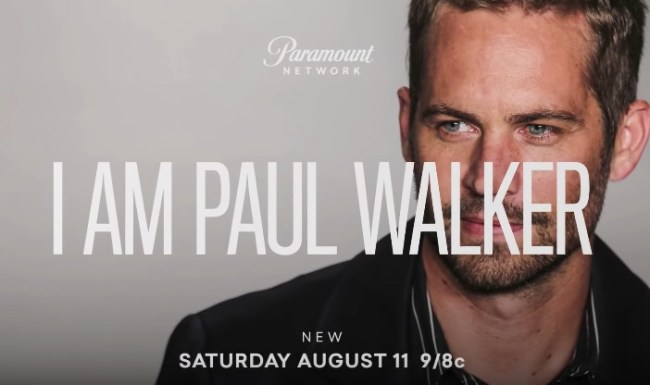 It has been 1,699 days since Paul Walker was taken from this earth in a tragic automobile accident. He was one of the most beloved actors in Hollywood. One of the faces of the Fast & Furious franchise. A father. Humanitarian. And so much more.

On August 11th, I Am Paul Walker will premiere on the Paramount Network and they’ve just released the trailer for the latest installment of their I Am documentary series. Previous titles have included I Am Chris Farley and I Am Heath Ledger.

This documentary will showcase never-before-seen footage of Paul Walker’s life as well as all-new interviews with Paul’s parents Paul Walker Sr. and Cheryl Walker, his two brothers, two sisters, Paul’s daughter, friends, and people in the film industry whom Paul worked with during his short but incredibly successful career.

I Am Paul Walker will premiere on the Paramount Network at 9pm EST on August 11th (two weeks from this Saturday). So be sure to set your DVR ahead of time and make sure you know where the Paramount Network station is on your TV box. For fans who were devastated by Paul Walker’s tragic early death, this won’t necessarily bring much closure but it will add another chapter of new footage to his incredible life.