Images Of Protesters Storming The Capitol, Clashing With Police Are Utterly Mindblowing 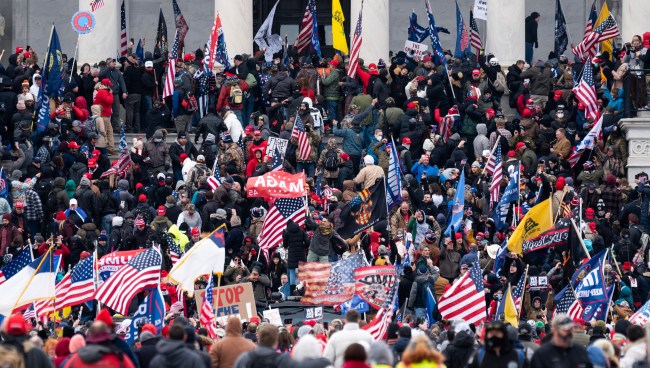 On a day which normally goes by almost unnoticed – the day when the President-elect is certified by Congress – has turned into a scene that surely has never been seen in the 243-year history of United States of America.

Incited by remarks issued by the current American President Donald Trump, a mob of protesters have stormed the Capitol in an misguided attempt to halt the democratic process despite there being absolutely no credible evidence that President-Elect Joe Biden won the election illegally.

“All of us here today do not want to see our election victory stolen by emboldened radical Democrats,” Trump said today in a speech at the White House. “We will never give up. We will never concede. It will never happen. You don’t concede when there’s death involved. Our country has had enough. We will not take it anymore.”

Trump also, incredibly, referred to to the counting of ballots in the election as “explosions of bullsh-t.”

He also called on his Vice President Mike Pence to overturn Biden’s election, something he doesn’t have the authority to do, and has since stated he has no interest in doing.

“It is my considered judgment that my oath to support and defend the Constitution constrains me from claiming unilateral authority to determine which electoral votes should be counted and which should not,” Pence wrote in a three-page letter addressed to Congress.

Trump supporters who do not care about the democratic process and just selfishly want to create havoc have since invaded the Capitol and the images are startling.

I am asking for everyone at the U.S. Capitol to remain peaceful. No violence! Remember, WE are the Party of Law & Order – respect the Law and our great men and women in Blue. Thank you!

House GOP Leader Kevin McCarthy tells @NorahODonnell he has asked President Trump to talk to the nation and stop the chaos at the U.S. Capitol: "What we're currently watching unfold is un-American…This is not the First Amendment. This has to stop and this has to stop now." pic.twitter.com/D56mAVVXQw

Peaceful protest is the right of every American but this attack on our Capitol will not be tolerated and those involved will be prosecuted to the fullest extent of the law.

A protester hangs from a balcony in the #Senate Chamber after Trump supporters breached the U.S. Capitol in Washington, DC #USCapitol #CapitolBuilding 📷: @WinMc pic.twitter.com/pzRG8DeNq1

Trump supporters have entered the US Capitol rotunda after storming the building as Congress was in the process of certifying Biden's presidential victory (📸: Saul Loeb/AFP via Getty Images) pic.twitter.com/ircWIAID2P

Absolute calamity at the U.S. Capitol. Smoke bombs, tear gas and people infiltrating the building. 30 mins ago some here hijacked this equipment and took flags to the windows.

Others asserting that “1776 has commenced again.” pic.twitter.com/PcKMpuKLT5

People are climbing the walls of the Capitol pic.twitter.com/t4FJXmwFBK

Scores of Trump supporters breached the Capitol building and neared the Senate floor on Wednesday afternoon as thousands cheered and clashed with police in front of the building. https://t.co/wH1URGxPnI pic.twitter.com/GDIQF7tpY7

Capitol Police are chaining shut the doors to the tunnel between Russell and the Capitol. pic.twitter.com/e7KavelVQ3

They breached the Capitol pic.twitter.com/tWKxojW2Hr

The Capitol is literally being broken into.

Protestors have entered the Capitol. pic.twitter.com/dzaDGn5MoC

BREAKING: Trump supporters have breached the Capitol building, tearing down 4 layers of security fencing and are attempting to occupy the building — fighting federal police who are overrun

This is the craziest thing I’ve ever seen in my life. Thousands, police can’t stop them pic.twitter.com/VVdTUwV5YN

Police and Trump supporters are going at it INSIDE of the Capitol. Never thought we’d see something like this pic.twitter.com/MqBJoKYHbP

They just put up a cross in front of the capitol building pic.twitter.com/0LrGQ5zj9e

Trump supporter breaking the glass at Capitol building and climbing through the window pic.twitter.com/mCIMoqsbxA

The police are literally stepping aside to let the rioters inside the Capitol. pic.twitter.com/nAAkxuOh68

"You're a liar!" — Trump supporters accost a Fox News reporter live on the air near the Capitol pic.twitter.com/30v1dgYs6o

An attempt to take down the U.S. flag and replace with a Trump flag at the Capitol. pic.twitter.com/oXg0LMmVQf

National guard and federal forces are heading to the Capitol building. pic.twitter.com/E08SgT4IIr

This is the fbi swat team in the capitol. pic.twitter.com/bY6maxLjLJ

Right-wing terrorist uses a steel barrier as a battering ram at the US Capitol pic.twitter.com/GjmPNQYT4b

Trump supporters moved in and attacked a media section near the Capitol Building and are trashing their cameras and equipment ⁦@WTOP⁩ pic.twitter.com/N6ov5a3pCu