‘What Is Imitation Crab Made Of?’ – Other Questions About Fake Krab Answered 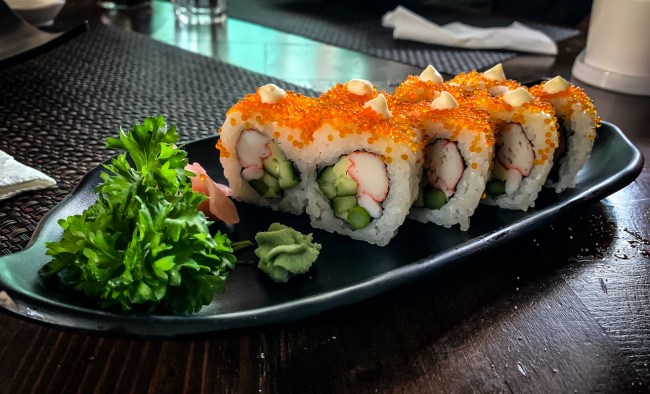 You’ve seen imitation crab in sushi, or in kani salad, and at the supermarket’s seafood section, but have you ever asked yourself, “What is crabstick made of?”

Some restaurants call it “krab” with a “k,” while others call it crabstick, and it is also referred to as “kanikama,” “kamaboko,” and “surimi.”The question you may ask is, “What is imitation crab?” Non-meat eaters may ask, “Is imitation crab vegan?” The answer to the common questions is that crabstick is not vegan because it is made of fish, but not shellfish.

Where Did Crabstick Come From?

Imitation crab was first produced in Japan in the 1970s. It was presented as a cheaper alternative to pricey crab meat. The fake crab mimics the taste, texture, and color of real crab meat.

What Is Imitation Crab Made Of?

Crab stick is made of cheaper white fish varieties, often pollock – which is commonly used for frozen fish sticks.

The fish is pulverized to create a paste that can be molded into the shape of a crab leg for food.

“Binding agents, like egg white, starch, vegetable oil, or sugar, are added to the surimi paste to make the meat stick together,” WebMD reports. “Occasionally, monosodium glutamate (MSG) is added to the surimi. Orange or red coloring is the key ingredient added to make the mixture resemble shellfish meat.”Krab is made from starches such as wheat, potato, and tapioca.

Since crabstick is processed, it features higher sodium and sugar amounts compared to natural crab.

“The fish paste is then formed into sticks and tinted red on the side to look like a crab leg,” according to Mic.

While real crab and imitation crab have about the same caloric intake, the fake crab has some issues.

Healthline points out, “Real crab meat has nearly three times the amount of protein as imitation crab, which gets most of its calories from carbs. Plus, real crab is much higher in vitamins and minerals than imitation crab. This is because some of the nutrients of the fish are washed away during the surimi processing.”

“Real crab provides a higher amount of vitamins and minerals,” WebMD states. “It’s a good source of vitamin B12, selenium, and zinc. When making surimi, these nutrients are lost during washing and processing when the fish meat is exposed to heat. Real crab also has a higher amount of omega-3 fatty acids than its mock substitute. Some packages of imitation crab may have added omega-3, but this isn’t always the case.”