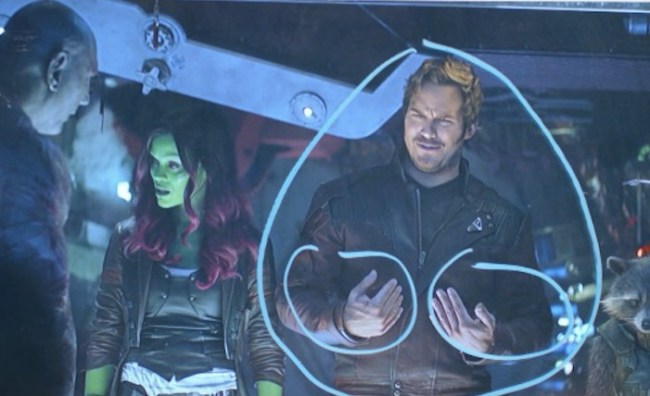 If you’ve already seen Avengers: Infinity War in the theaters then CONGRATULATIONS, you’re not alone. The film has already made over $808,364,408 worldwide at the box office so if you’ve already seen it like I did, and my colleague Doug did twice, you’re not special. Pretty much half the known universe has seen it….There are some SPOILERS ahead if you haven’t seen the film yet. I hope you could tell that I was just stalling above to add some text between the top of the article and the good stuff below. You are special. I didn’t mean that….Again, there are potential spoilers ahead if you haven’t seen the film.

Marvel billed Avengers: Infinity War as the ‘most ambitious crossover’ in movie history and while the ending abso-fucking-lutely shocked fans worldwide and left millions of devoted Marvel fans devastated the film itself is easily one of the greatest superhero films ever made. One of the scenes we always knew was coming was a member of The Avengers meeting the Guardians of the Galaxy squad.

Infinity War co-directors Anthony and Joe Russo got together with Vanity Fair to break down the scene when the Guardians find Thor floating in space and they meet for the first time. A scene that sees Peter Quill / Star Lord feeling a little self-conscious about Thor’s unbelievable physical presence:

I’ve never worked on a film set but this blew me away seeing how much thought went into every minuscule detail of this scene. The lightning of Thor’s body with the cast flanking him on all sides. Making it feel more real by shooting hand-held. A different color palette across the room. Everything worked perfectly to introduce the Guardians to the Avengers film franchise and make it all seem as if they’d been there all along.