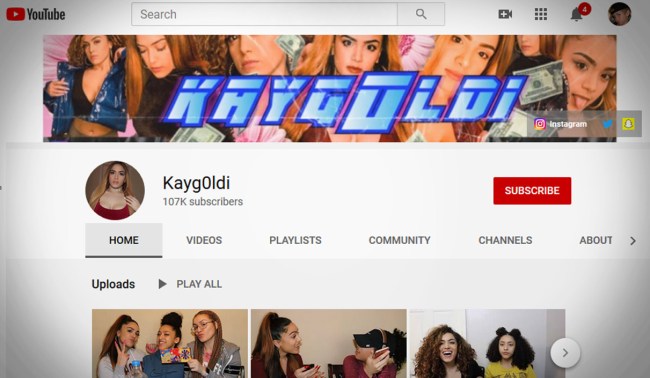 ProTip: Don’t give your personal financial information to a social media influencer. This is a lesson some of the over 338,000 followers of Instagram and 107,000 YouTube subscribers of influencer Kayla Massa learned the hard way.

For you see, the 22-year-old Massa, along with nine others, was arrested on Thursday for allegedly scamming many of her social media followers out of over $1.5 million, according to a complaint unsealed in New Jersey federal court and revealed in a recent report by Quartz.

According to the complaint, Massa would ask “individuals to empty their bank accounts before providing their debit card and PIN” to “falsely allay any fears of losing money.”

How not to steal $1.5 million: Inside an Instagram influencer’s alleged debit card scam https://t.co/GRC3moWau6

Massa allegedly promoted her scheme through posts on Instagram Stories, featuring stacks of money, screenshots of bank account balances, and money orders. There were videos of people flashing debit cards and large amounts of cash.

“If you have a bank account and trying make some bread dm me (serious ppl only) 💰💰💰,” read one frame caption.

The group also allegedly “advertised” on Facebook and Snapchat.

It was all perfectly legal and legitimate, Massa would allegedly tell her marks. To “falsely allay any fears of losing money,” Massa “encouraged individuals to empty their bank accounts before providing their debit card and PIN,” according to the complaint against her.

The investigation that resulted in Massa’s arrest reportedly began in July 2018 when some blank money orders were stolen from a U.S. post office in Berlin, New Jersey.

Massa and her accomplices allegedly scammed over 45 people by having her followers give her their debit card, PIN number, and online login information after encouraging them “to empty their bank accounts before providing their debit card and PIN.”

She would then deposit the stolen money orders into the follower’s account at an ATM.

The funds from the fraudulently obtained money orders and counterfeit checks would clear before the bank discovered the fraud. The ring would then withdraw the cash and often buy new, legitimate money orders with the ill-gotten gains in an attempt to launder it.

When one victim realized early on that they had unwittingly taken part in a fraud scheme, they managed to get in touch with Massa and threatened to report her to the police.

“Do what you gotta do,” Massa replied, according to court documents.

The stolen postal money orders and counterfeit Western Union money orders made up one part of the fraudulent deposit scheme, which is known as “card-cracking.” Counterfeit checks drawn on local businesses—including a car dealership where one of the accused co-conspirators worked — made up the other.

Massa and company were eventually caught because they deposited counterfeit checks into bank accounts belonging to Massa’s mother and Massa’s sister, Leire, using her real name and address. All 10 of the people arrested were also seen on surveillance cameras depositing counterfeit checks into and making withdrawals from victims’ bank accounts, as well as purchasing more money orders at post offices.

Postal inspectors connected stolen postal money orders to a series of fraudulent bank account activities at various area banks. They discovered a network of individuals in the Sicklerville, Clementon, and Gloucester City areas who posted advertisements on Instagram and Snapchat, offering people the ability to make “quick cash” if they banked at certain institutions. Some members of the conspiracy then acquired individuals’ banking information using a ruse, while others printed counterfeit checks that they deposited into the accounts. Members of the conspiracy also used victims’ debit cards to withdraw cash and make large purchases, including purchases of money orders. The group financed purchases of luxury items, including jewelry, watches, other luxury goods and apparel, vehicles, with the stolen funds. In most cases, the victims of this scheme suffered financial losses and credit problems as a result. The estimated loss at this time exceeds $1.5 million.