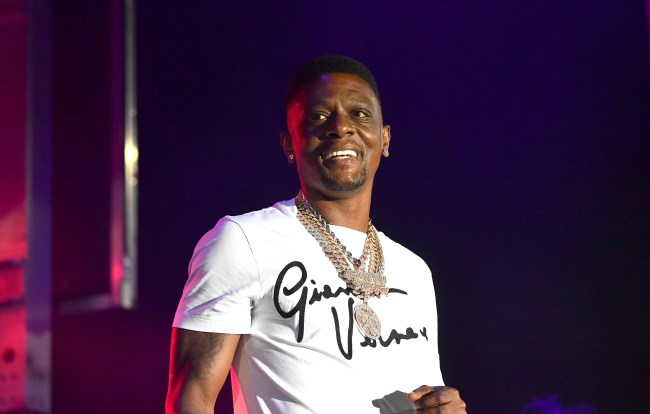 Last year, Boosie lost his original Instagram account that had 9 million followers after he repeatedly broke IG’s rules on nudity during his infamous live streams.

On Saturday, Boosie lost his backup account that had already accumulated nearly 1 million followers after he posted a video of himself slapping a man real hard inside a gas station.

Lil Boosie Slaps A Man Who Was Talking Crazy To Him At A Video Shoot With Dababy😳 pic.twitter.com/B6419Pzfgi

Apparently, the stunt was filmed for Boosie’s latest music video and the man was paid $554 for his role.

Despite the fact that the video was for a music video, Instagram thought it was too much and apparently banned Boosie from the platform.

-but it resulted in Boosie loosing his page with 1 Million followers.

Back in December Boosie told Vlad TV he was going to sue Mark Zuckerberg for $20 million due to all the money he lost when his Instagram account got banned.

During a recent sit-down with VladTV, the 38-year-old rapper claimed he was suing the tech titan over his Instagram ban back in August. He claims the platform’s decision to deactivate his account took a heavy toll on his business ventures, so much so that he is supposedly suing Zuckerberg for $20 million.

“[Zuckerberg] made some of my business ventures go down, so I’m suing him now. I’m filing a lawsuit against him now,” he said. “… He stopped me off Instagram and he didn’t put me back on Instagram. And that’s affecting my business.”