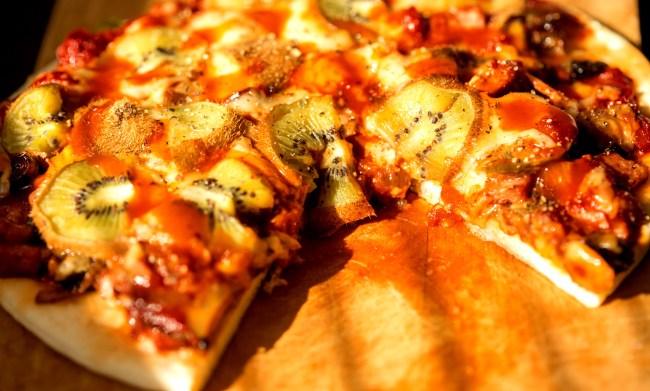 We all agree that putting fruit on a pizza is wrong, yes? Especially pineapple. (Sorry, Rock.)

Pizza was meant to have meat and maybe some vegetables on it. That’s it. I don’t care if you’re a fan of Chicago-style, Sicilian, whatever, no fruit allowed. Pepperoni, sausage, bacon (mmm, bacon), ham, chicken, heck, I can even live with just plain cheese pizza. But NO FRUIT!

So you can only imagine the reaction of a Reddit user who ran across and posted a photo of a pie from a Danish pizzeria made with Kiwi fruit on it.

He called it “an unholy abomination.” And he’s right.

434 comments were made after people got a look at this thing, and many of them rightfully agreed that this pizza should be considerd a crime against humanity.

“This is why the Scandinavian countries hate each other, someone else commented on Swedish banana pizza, I wonder what nutter things the Norwegians do?” asked nuadusp.

Even the Danish were appalled.

“As a Dane, I feel fairly confident in stating this is not something we do…” wrote Hjemmelsen.

Folks on Twitter also got wind of this pizza desecration and reacted appropriately.

If I open a pizza box and see kiwi, someone’s gotta die https://t.co/JWg6ZFoB0a

I have can now say I have witnessed hell@DaddyWarpig pic.twitter.com/WjC48p9Y3U

Why am I seeing kiwi on pizza?

NO, NO, NO... WE NOT PUTTING EVERY DAMN PIECE OF FRUIT ON A PIZZA AND TRYING TO MAKE IT A THING. PINEAPPLE ALREADY DON’T BELONG ON IT, SO WHY TF WOULD KIWI? 🤦🏾‍♂️ YALL MAKE MY STOMACH HURT WITH THIS NONSENSE. https://t.co/fbs0ckOo3z

Mothafuckas out there finding a way to destroy pizza.

And I like Kiwi but not on pizza, I hope they rot in hell. Lol

Kiwis on pizza? I thought we were leaving psychopathy in 2019 pic.twitter.com/x1zWlJw7t6

this is not how it works

pineapple eaters have made degeneracy acceptable and made people think it's okay to put kiwis on pizza https://t.co/vrFDa7juDs