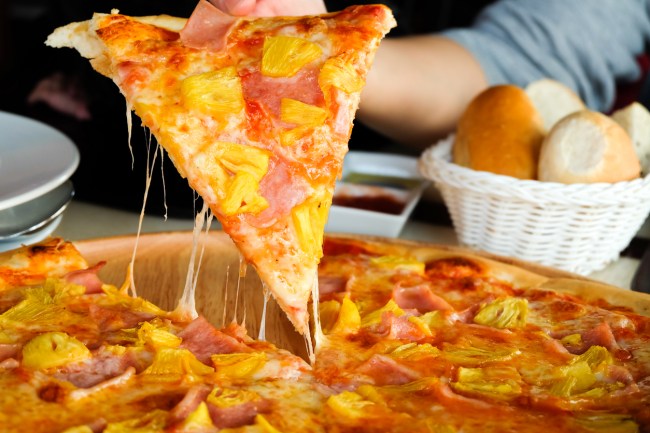 In the early 1960s, the late Sam Panopoulos was so preoccupied with whether or not he could that he didn’t stop to think if he should put pineapple on a pizza and in turn created one of the most controversial combinations in the culinary world.

The debate over the merits of what was dubbed the “Hawaiian pizza” has raged on for decades and has only gotten more contentious thanks to the internet, the only place where you can be at the receiving end of a death threat for having an opinion about food.

Of course, putting pineapple on a pizza seems tame compared to some of the other monstrosities people have dreamed up in recent years, like this mustard-based creation that should be banished to another dimension.

This pizza uses mustard instead of tomato sauce 😳 pic.twitter.com/XUKKQOBLwM

I’m all for celebrating the holidays but am of the firm belief you should be banned from Christmas for putting candy canes on top of a pie.

I’d also argue even the most ardent defenders of pineapple pizza can admit there’s such thing as going too far.

pizza on a pineapple pic.twitter.com/4D3YA5hz98

Pineapple pizza made its way back into the headlines a couple of weeks ago after the spineless president the people of Iceland elected to lead them issued an apology for suggesting the food should be banned in the country, which was one of the more reasonable things I’ve seen a politician suggest in recent memory.

Unfortunately, there are still plenty of misguided souls out there— including Dwayne Johnson, who recently shared a photo of one of his laughably enormous cheat meals.

In an extremely entertaining caption, The Artist Formerly Known as The Rock professed his love for pineapple pizza (the real story here might be that he throws tequila in his oatmeal, which I will be trying as soon as I get a chance).

Of course, Johnson spent time in Hawaii growing up so I guess I can give him a bit of a pass here (even though I’m still going to judge him for it).

More than a few people were quick to suggest the fact that Johnson is pro-pineapple has ended the debate once and for all.

If Dwayne The Rock Johnson approved pineapples on Pizza, then there should never be any argument regarding this matter anymore, period.

Dwayne Johnson likes ham and pineapple on his pizza so all you haters can shut the fuck up now.

Dwayne The Rock Johnson puts pineapple on his pizza. The debate is now settled pineapple does belong on pizza and its amazing.

I hope one day all of these people will see the error of their ways. It’s never too late to repent.