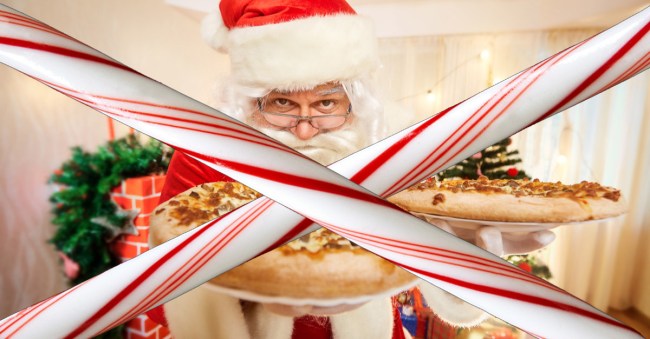 For some unknown reason, there is a maniac out there in this world that decided that melting candy canes on an otherwise delicious pizza would be a super-special treat for “the holidays.” Yes, it does look like it would taste horrible, and yes, people on the internet absolutely hate it.

Seriously… what in the blue hell kind of thinking is going on here? Just look at this thing…

No way this woman in the photo below did not immediately (a) spit this abomination into the trash, (b) blow chunks all over that table she is sitting at, or (c) was actually just pretending to eat the candy cane-covered pizza to try to trick some fool on the internet into believing that, hey, it’s actually not that bad! (Trust me, some dope out there will do this. It’s a 100% lock.)

‘Tis the season…to be jolly, my dudes.

One thing is for sure, it will not be me and will also definitely not be any of these people on Twitter…

Me after seeing this pic.twitter.com/c0b42PJRjg

did you take a picture of her vomiting after that?

It looks like someone murdered Christmas and then ate it.

Don’t compare this to pineapples on pizza, that’s just nasty

DiGiorno are you going to call the cops or should I?

Sorry you had to see that.