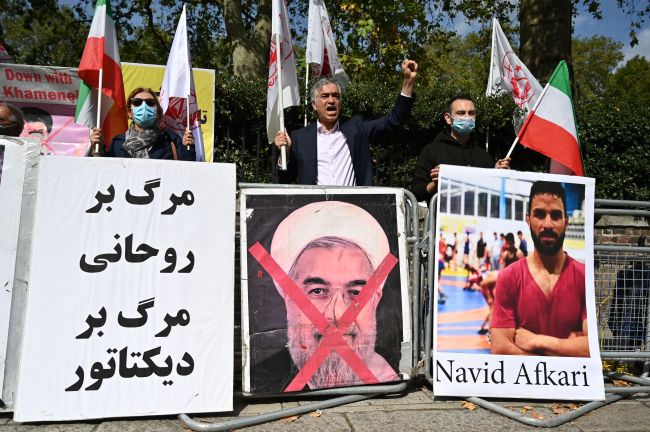 The Iranian regime just executed 27 year old champion wrestler Navid Afkari. He was falsely accused of murder, to set a high profile example against protesting the terror regime. Instead he will become an inspiration to #FreeIran from tyranny. https://t.co/SZiB0fPhoq pic.twitter.com/yQiQe9t2UX

Really sad news today out of Iran. Champion wrestler Navid Afkari was executed for taking part in a protest back in 2018. The Iranian government claimed that he had stabbed and killed a security guard, but Afkari said that his admission to these crimes was given under torture.

Guardian– Iran has executed a champion wrestler convicted of murdering a security guard during anti-regime protests in 2018, state media said on Saturday, despite an international campaign to spare his life.

Navid Afkari, 27, was executed “this morning after legal procedures were carried out at the insistence of the parents and the family of the victim”, the Islamic Republic News Agency quoted the head of the justice department in the southern Fars province as saying.

His case had created a global outcry, including from the US president, Donald Trump, and from the World Players Association (WPA), a major athletes’ union representing 85,000 people, which had called for Iran’s expulsion from world sport if the execution went ahead.

The case drew the attention of the international sporting community, as well as leaders of state. President Trump made an appeal for Iran to spare Afkari’s life:

Hearing that Iran is looking to execute a great and popular wrestling star, 27-year-old Navid Afkarai, whose sole act was an anti-government demonstration on the streets. They were protesting the “country’s worsening economic situation and inflation”…

It was a remarkable and united effort to draw attention to Afkari’s case and attempt to convince the Iranians to spare Afkari’s life. Tragically, Iran ignored the pleas and executed the 27-year-old Afkari via hanging today.

Hopefully, the International Olympic Committee will respond in some way. As sad as the news is, there is perhaps a measure of hope to be drawn from how many people Afkari affected, how many spoke up and wanted to help him, all over the world.