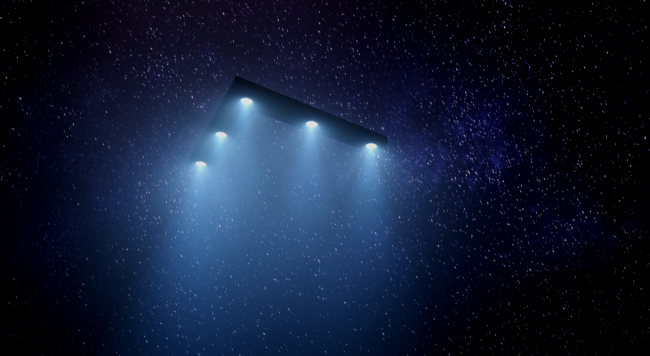 UFO sightings are rarely reported by a large number of people. Usually it’s one or two witnesses. So when literally dozens of people in several different areas of a country say they all saw the same thing and can’t explain it then it is big time news.

Such a case occurred in Ireland this week when scores of people witnessed a bizarre V-shaped UFO in the night sky.

The UFO was described as silent and very bright with rows of lights on its undercarriage.

One of the more well-know witnesses of this mysterious UFO in Ireland was former X Factor star Tabby Callaghan.

I just seen a huge ufo over my house in Sligo !! Shaped like a b52 stealth but made of lights lower than a domestic flight huge and silent !! My partner Also witnessed it ! I am speechless 😳#ufosligo

On Wednesday, Callaghan was interviewed by Ocean FM and further described what he witnessed, reports the Irish Mirror.

“I was out having a cigarette out the back and I looked up and I see a thing, initially I thought it was a flock of geese and I realized very quickly it wasn’t,” he recalled. “Then I screamed to Anna to come out quick and my partner seen it as well.

“I would describe it as an upside down W, but except it looked like it was made of light. It was much lower even than a domestic flight.

“It went over our house, it was very slow, it wasn’t fast and here’s the creepy thing, it was totally silent as it went over the house. It was mind blowing to be honest with you.

“If it was military, it was very, very high end. Like I say, it was huge, it was low and it was silent. I can’t tell you what I saw but I can tell you what it’s not. It was sight to behold.”

Several people from different cities in Ireland called into the show to say they had witnessed the same UFO.

“I saw a massive UFO over the house, I know that sounds crazy but my wife saw it too. It looked like a stealth bomber but it was kind of translucent. It was massive and it was silent. It went by my house and it just disappeared,” said one listener.

“Initially I thought it was a flock of geese as it appeared closer I could see they were lights it had the shape of a stealth bomber except made of lights if that makes sense,” Callaghan added on UFO Network Ireland.

“What was profoundly creepy about it was it was much lower than a domestic flight it was very big.

“I should also add I seen that craft at 7:50 last night,” he continued. “One woman messaged me 15 minutes later after I put up a post to say that she had seen the exact same thing in a town maybe 20 minutes from where I live called Bundoran also seen it and the same thing happened it disappeared in front of her.”

The Irish Mirror contacted the Irish Aviation Authority, but has yet to report back.