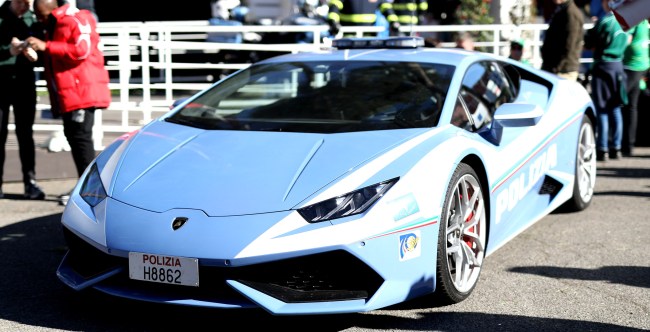 In perhaps the most Italy story ever, Italian State Police used a Lamborghini Huracan to transport a much-needed kidney to a transplant center just over 300 miles away in around two hours.

Police drove the legendary hypercar from Padua to to Gemelli University Hospital in Rome averaging a leisurely 145 miles per hour.

Of course, a feat such as this wouldn’t be complete in the year 2020 if there wasn’t video, right?

A very rough translation of the tweet via Twitter, reads, “Thanks to ours @Lamborghini Huracan delivered a donor kidney for transplant to a person in time “To save a life you don’t need superpowers” solidarity, technology and efficiency also help.”

Related: It Doesn’t Get Much More Intense Than A Lamborghini Huracan Drag Racing A MIG-29K Fighter Jet

As The Drive accurately points out, “this journey would take at least five hours in normal conditions” based on a quick check of Google Maps.

They also accurately point out, why didn’t the Italian police just use a helicopter? Wouldn’t that have been safer and/or quicker?

The Italian State Police actually has a few Huracans for situations like these, and they’re also outfitted with a refrigerated frunk for transporting organs or other temperature-sensitive medical supplies. The vehicles also have defibrillators on board, making them much more than just a loud way to give tickets to speeding Italian motorists.

They also go from 0 to 62 mph in a jaunty 2.9 seconds, and look really, really freaking cool. So there’s those factors, as well.