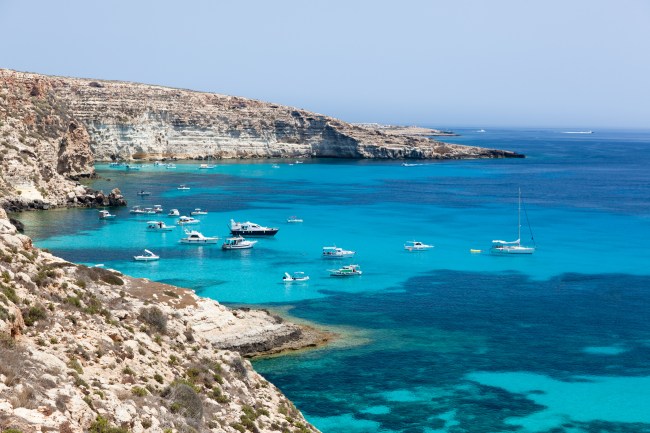 I’ve never been able to make heads or tails of the ‘Flat Earth’ movement. Anyone with a functioning brain knows the Earth isn’t flat and any skeptic can see literally MILLIONS of images of Earth from outer space if they need even the slightest bit of convincing. Yet somehow these people find it easier to believe in a never-before-seen ice wall at the ends of the planet where everything just stops. That’s really easier to believe than reality? Than what their own eyes show them?

Well, if you play stupid games you win stupid prizes and that’s exactly what happened to a couple in Italy who sold their car to buy a boat and set sail for the end of the flat earth, which to them was some Italian island that millions of their Italian ancestors have probably sailed past throughout history. And instead of finding a flat wall at the end of the earth they got lost and were taken into quarantine.

It didn’t end there. They tried to escape!

Here’s the story from VICE:

The man and woman, both from Venice, set sail towards Lampedusa – an island between Sicily and North Africa – to find “the end of the world”, which they believe is near the Sicilian island, reports Italy’s la Repubblica.

Having sold their car to buy the boat in Termini Imerese, a town in northern Sicily, the couple had to sail around the island to make it to Lampedusa, which in the last decade has become a common transit point for migrants and refugees trying to make the treacherous journey from Africa to Europe across the Mediterranean Sea. Unfortunately for the Flat Earther duo, they didn’t quite make it to their intended destination, ending up instead on Ustica, an island situated just northwest of where they set off, and a very long way away from Lampedusa.

The couple were taken into quarantine on Ustica, before trying to escape, being taken back to quarantine, and then trying and failing to escape once again. After they had decided to stay put and fulfill their required time in quarantine, the couple abandoned their doomed boat and took a ferry back to mainland Italy. (via VICE)

I have the best image of that ferry ride home in my head. The couple is just completely dejected and ashamed of their idiotic failed mission. Embarrassed to go back home and face their friends and family who all knew this was a pathetic fool’s errand. They order some drinks on the ferry to take the edge off as the shame sets in and some other ferry passengers strike up a conversation to ask them what brought them out there.

That’s when the reality of having to explain their colossally idiotic mistake sets in and there’s a rising sense of shame in this new world where they’re the people who sold their possessions to find some make-believe wall on a flat earth. That’s life now. OOF.