‘It’s Always Sunny’ Asks For Emmy Consideration The Only Way It Knows How: With Hilarity And Depravity 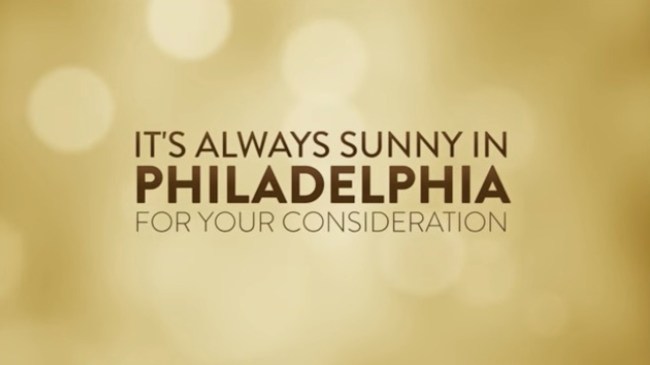 For the last 14 years, it can be argued that the funniest show on television is also the medium’s most criminally underrated.

Despite the fact that It’s Always Sunny in Philadelphia has been one of the most well-reviewed and feverishly beloved comedy series of the last decade-plus, it has few — if any — major award season accolades to show for it.

Outside of two measly awards — a Peoples Choice Award in 2016 and a Satellite Award in 2011 — It’s Always Sunny in Philadelphia has gone through the course of its almost-15-year run without any wins at the “prestigious” television award shows such as the Golden Globe Awards and the Emmy Awards.

But with the 14th season of the iconic FX (now FXX) comedy series on the horizon, the network is making a push for It’s Always Sunny in Philadelphia to finally receive the official critical recognition it’s always deserved.

In classic It’s Always Sunny fashion, the “For Your Consideration” video is hilarious in a way that all of its competitors are not: its generally cheap, disgusting, and immoral.

But THAT is what makes It’s Always Sunny legendary: its utter disregard for the norms.

So, it should come as no surprise that the series’ plea for award season recognition is a microcosm of the show itself: underproduced, aggressive, and laced with a genuine lack of giving a fuck.

Highlighting some of the show’s most iconic moments, FX is begging — literally begging — the powers that be to give them an award for anything.

It’s Always Sunny in Philadelphia will make its long-awaited return to FXX airwaves for its 14th season on Wednesday, September 25.