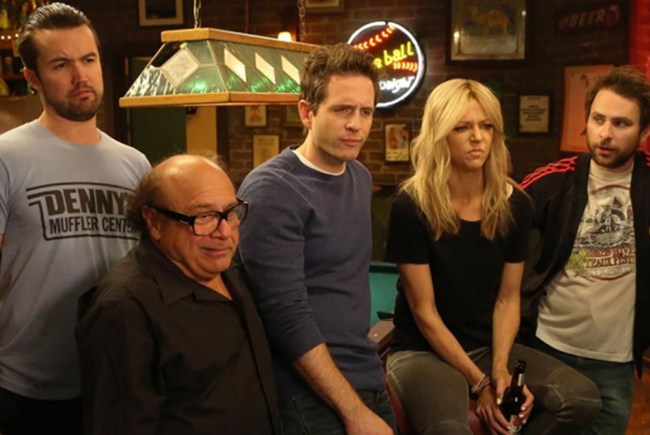 On Wednesday night, the first two episodes of It’s Always Sunny in Philadelphia premiered, and in the process, helped the beloved FX series break a historic record in the process, as the gonzo comedy is now the longest-running live-action TV sitcom… ever. It’s Always Sunny took the title away from The Adventures of Ozzie and Harriet, which ran for 14 seasons between 1952 and 1966.

First premiering back in 2005 — when this world of ours was a much, much different place — no one could’ve predicted how successful the series would ultimately become.

During a recent interview with the New York Times, McElhenney detailed how the series came to life over 17 years ago.

The idea for one of TV’s most successful comedies was born modestly enough, coming to McElhenney in the middle of the night in 2004, two years after he moved to Los Angeles. He envisaged a scene in which a guy knocks on his friend’s door to ask for some sugar for his coffee. The friend tells him he has cancer. The first guy is really sorry to hear that — but he still needs the sugar.

While living in a converted West Hollywood garage and working as a waiter, McElhenney approached his fellow aspiring actors Day, Glenn Howerton and Jordan Reid (then McElhenney’s girlfriend) with a script, and they shot the original pilot for “Sunny” on a hand-held camcorder. They shopped it around and, according to McElhenney, the fledgling FX offered the best chance for the team to retain creative control and to do the low-budget show their way. [via New York Times]

It’s Always Sunny in Philadelphia certainly won’t be slowing down anytime soon, either: back in December 2020, the show was renewed for a total of four more seasons, which will eventually bring it to season 18.

RELATED: We Ranked The Best ‘It’s Always Sunny In Philadelphia’ Episodes To Determine Which One Is The Golden God