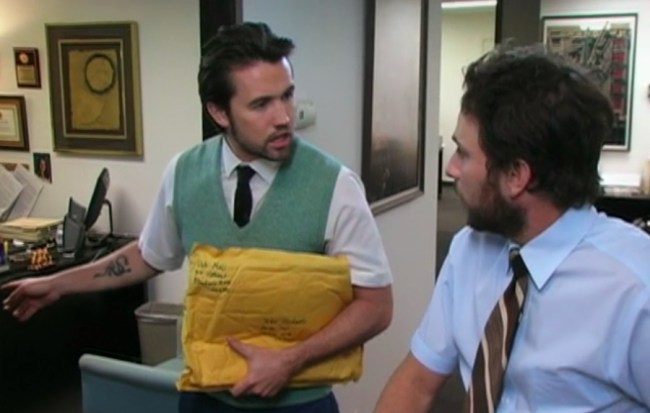 If you’re like me, you have a couple of shows you turn to when you don’t want to spend 20 minutes scrolling through your streaming service of choice before ultimately settling on a series you’ve already watched in its entirety multiple times.

If statistics are to be believed, The Office is far and away the most popular show on Netflix thanks to people like you and me who rely on it when you just want to watch something, which is why fans understandably freaked out when it was revealed it will be leaving the platform in 2021.

The Office is definitely my go-to rewatchable but It’s Always Sunny in Philadelphia is a close second and one of the main reasons I pay for Hulu (and when I say “pay for Hulu” I mean “use the login info of my friend who actually pays for Hulu”).

Last week, Rob McElhenney revealed It’s Always Sunny was filming an episode at the same building that housed Dunder Mifflin in a video where he jokingly fired a shot at Steve Carell.

it appears the video caught Carell’s attention, because the day after it was posted, he hopped on Twitter and tried to quash the imaginary feud by suggesting the two join forces to give fans what they didn’t know they needed: an It’s Always Sunny/The Office crossover.

Rob, this blood feud has to end.
"It's Always Sunny in Scranton". Thoughts?@RMcElhenney https://t.co/12Dh6GopKU

McElhenney responded and suggested it wouldn’t be too farfetched if The Gang found itself in Scranton.

SCRANTON IS ONLY A HUNDRED AND TWENTY MILES AWAY FROM PHILADELPHIA. @SteveCarell THIS WORKS. WHO WANTS IT MORE – @fxnetworks @nbc @netflix @hulu?? The bidding shall begin at five hundred million dollars. https://t.co/PWsgfnhaul

According to People, Angela Kinsey—who played her namesake on The Office—left a comment on Instagram where she said, “I think we all need this. Sign me up for the bitchy blonde” before McElhenney reminded her It’s Already Sunny already has one of those in the form of the giant bird who is Dee.

Look, I’m not going to act like there’s any chance this is actually going to happen given the logistics involved but I can’t think of anything I’d love more than a crossover between my two favorites shows.

With that said, someone needs to start a $500 million GoFundMe so we can make my dreams a reality.