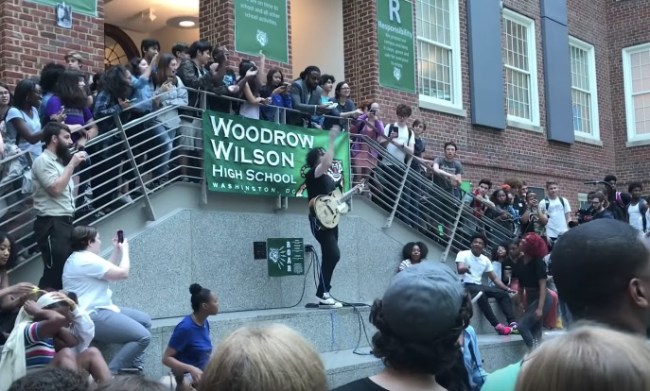 Jack White of The White Stripes has been in Washington D.C. for two sold-out concerts at The Anthem. In between those shows, Jack decided to throw a pop-up concert at DC’s Woodrow Wilson High School that culminated with a rowdy as hell rendition of ‘Seven Nation Army’, Jack White and The White Stripes’ most famous song.

I can’t say that anything even close to this ever happened on my H.S. campus. We occasionally had a motivational speaker come in for afternoon assembly, maybe we had some authors. But we never had one of Rolling Stone‘s top 100 guitarists show up on campus and play an impromptu concert in the quad, nothing like this:

According to Consequence of Sound, Jack White’s impromptu performance lasted somewhere around 45 minutes and it took place during the school’s lunch period:

“They knew we have this big atrium space, and they thought that that might be an appropriate place for him to set up and do a pop-up show,” explained the school’s Principal Kimberly Martin. To maintain the surprise, only Martin and another school administrator were aware of the performance prior to it take below.

It’s pretty incredible that they were able to pull this off without someone spoiling the surprise, and it sounds like one hell of a way to close out the school year.