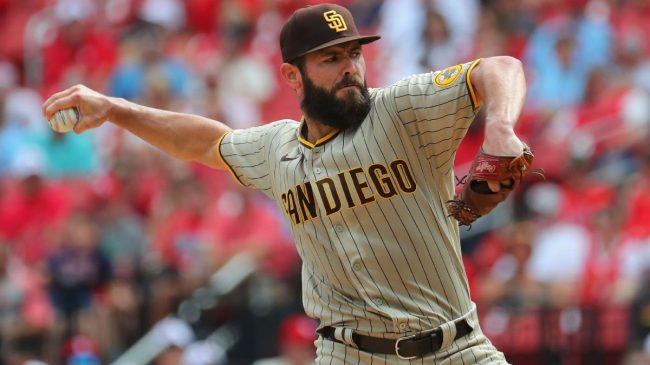 Jake Arrieta was once the most feared pitcher in Major League Baseball.

The flame thrower had a dominant stint in Chicago where he posted a 73-42 record over four and a half seasons. In 2015, he reached the pinnacle of the position, winning a Cy Young award following a 22-6 campaign. His ERA that season was a staggering 1.77 for the year.

Simply put, he was near unhittable.

Arrieta was known for a having a deadly cutter that would saw off the hands of opposing batters. He wasted no time on hitters, attacking the strike zone aggressively to put guys away.

Apparently, that aggressive mentality carried over into his time as a Little League pitcher.

Arrietta was recently on the “Pardon My Take” podcast, where he discussed a story of when he struck out five Little League hitters in what sounded like a dominant performance.

The only problem was that the righty was pitching as a coach for his son’s team. He was supposed to be trying to let the kids hit the ball as opposed to making them whiff and walk back to the dugout. Unfortunately, he was having a little trouble toning his speed down.

Making things worse, he plunked another three batters that he faced, which riled up the parents of his son’s teammates.

Listen to Arrieta describe the experience below.

Jake Arrieta vs his sons little league team was an all time story. Little control issue but still can get guys out. pic.twitter.com/1sWa7guBVU

“I can’t throw slow… My son’s last game of coach pitch, we lost because I struck five guys out and I hit three… The parents on the other team were like, ‘Who is this guy?’

“It’s just one of those things where we’re not used to lobbing the ball.”

Big Cat, one of the hosts, goes on to ask if any of the five strikeouts felt good.

“100% now that you mention it. It wasn’t necessarily about where the pitch was at, it was more of that the kid was a little shit.”

The hit batters didn’t feel quite as good, though, since rather than be awarded first base, hitters had to go back to the dugout (you know, since Arrieta is supposed to be on their team).

The former Cub has announced that he’ll be retiring this season after 12 seasons in the bigs. Maybe now he can practice his coach pitch form so that his son’s team can actually pick up a win.