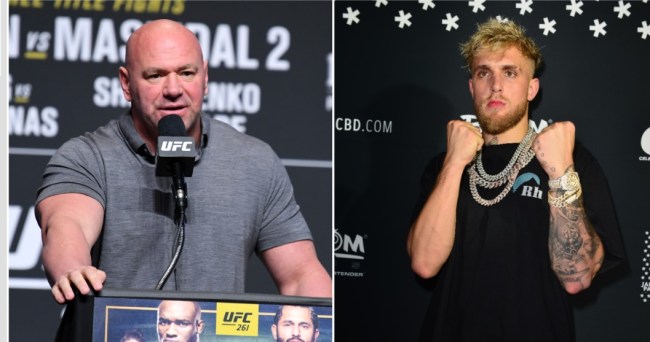 Jake Paul and Dana White continue to beef with each other.

After UFC 261 on Saturday night, the UFC President gave Paul props for showing up at the event and getting people to pay attention to him. White went on to take some shots at Youtube star-turned boxer for fighting less than stellar competition and lying about how many PPVs Triller sold.

Dana White reacts to @JakePaul's presence at #UFC261 and says he has no interest in doing business with the YouTuber. pic.twitter.com/autW0ae7sO

This kid’s done a good job of putting himself in a place to make some money,” “Good for him. He’s got (the media) talking about him all the time and asking questions about him, got Daniel Cormier running after him – so he’s doing something right.

“He knocked out an NBA guy who was 40 years old and 30 pounds less than him, and I don’t even know what to think about the Askren thing. The whole thing is f**king mind-boggling to me. But hey, good for him. Grab that money while you can, kid.”

“Do you know what would happen to this guy (in the UFC)? He ain’t fighting in the UFC. He’s getting hand-picked opponents, and God knows what else is going on with that whole f**king thing.

Paul immediately fired back at White and asked him why he’s been able to make more money than most UFC fighters with the exception of Conor McGregor and Khabib Nurmagomedov after only his third fight.

It seems like White is making the mistake of giving Paul the attention he seeks.