Jake Paul’s Mom Calls Hasim Rahman Jr. A ‘P—y’ After Having To Cancel Their Upcoming Fight 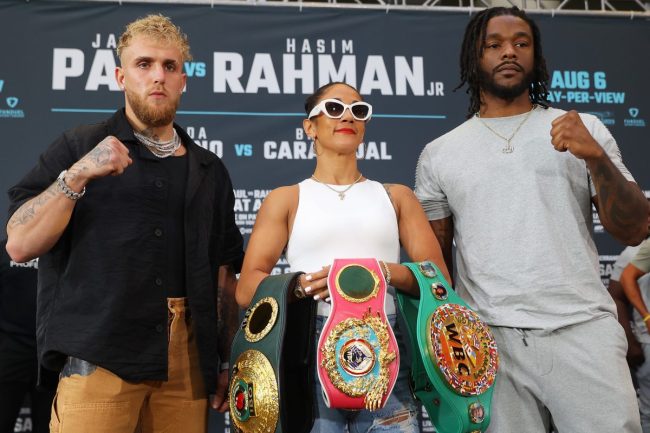 Jake Paul’s mom had some unkind things to say about Hasim Rahman after the fighter had to cancel his upcoming matchup with her son.

The two boxers were set to battle on August 6th. Rahman was actually a replacement after Tommy Fury backed out of his original fight with Paul. Now, a second fight has been nixed.

The issue dealt with Rahman’s weight.

The two originally agreed upon a matchup where both boxers would enter at 200 pounds. According to Paul, Rahman couldn’t make his weight, having lost just one pound from his 220-lb frame.

Paul went on a social media rant to talk about how scared Rahman was to fight him. His opponent fired back with an explanation of his own. He says it’s Paul’s team that is avoiding the fight.

“Let me go ahead and kill all this internet cap Jake Paul’s got going on for y’all… I signed the contract to make 200 pounds, but I couldn’t do it. My body simply would not let me do it.

“But where in boxing do y’all see them canceling fights a whole week in advance? I didn’t even get my last week to get down as low as I could. I told this man, ‘There’s penalties involved, keep the purse. I’ll fight you for the $5,000 minimum.’

“It’s clearly them not wanting to fight. It’s not me pulling out the fight.”

It doesn’t seem like the Paul family is believing what they’re hearing.

After hearing of the cancelation, Jake Paul’s mom took to Twitter to post her thoughts. It’s safe to say she doesn’t care for Rahman.

Pam Stepnick started name calling after seeing Rahman pull out of the fight. She, too, must think that the boxer is afraid to fight her son.

With the fight being canceled, it looks as though Paul won’t be matching up against anyone next weekend. Whose fault that it is up to interpretation.