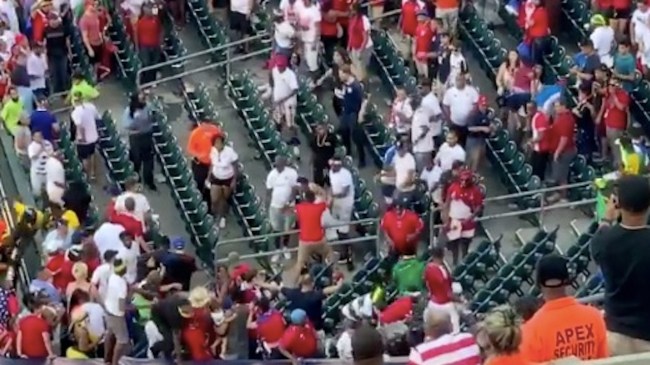 You know how the old saying goes: when in Rome, do as the Romans do, and when in Philadelphia, spit on a couple pregnant women, take a shit in a public mailbox, and get into a drunken pitchside brawl with some strangers.

As somebody who was born and raised in North Jersey, I’m particularly in-tune with the metropolitan animal cage we called Philadelphia.

A combination of all the negative stereotypes you hear about New Jerseyans and New Yorkers combined and come to life, Philadelphia truly is unlike any other city in the union and for all of the wrong reasons.

And because of that storied history of degeneracy, fans of the Jamaican and Panamanian soccer teams — who were in town to watch their nations play in the Gold Cup quarterfinals — paid homage to their host city by getting into an all-out scrap both before and after the game.

One of the many fights at the Linc after this Jamaica-Panama game pic.twitter.com/LuXS8KpF8k

For some pre-game entertainment, here are some Panama and Jamaica fans beating the snot out of each other after the final whistle. Enjoy. pic.twitter.com/n4vtkxN0VJ

Here’s some more I caught pic.twitter.com/JLuftiZqpM

As for the actual game itself (if you’re interested, and if so, why?), Jamaica sneaked by with a 1-0 victory of the Panamanians, earning them a berth to the Gold Cup semi-finals against the United States, who looked equally uninspiring in their 1-0 victory of Curacao.

The United States and Jamaica will face off in the Gold Cup semi-finals on Wednesday, July 3, at Nissan Stadium in Nashville, Tennessee.

On the other side of the Gold Cup bracket is Mexico and underdog Haiti, setting up a probable clash between the Americans and the Mexicans in the Gold Cup final on Sunday, July 7.

While the Gold Cup is not considered to be a prestigious footballing competition by any stretch of the imagination, winning the tournament would go a long way for the United States Men’s National Team, as this is their first competitive competition since failing to qualify for the World Cup thanks to a loss to Trinidad and Tobago back in late 2017.