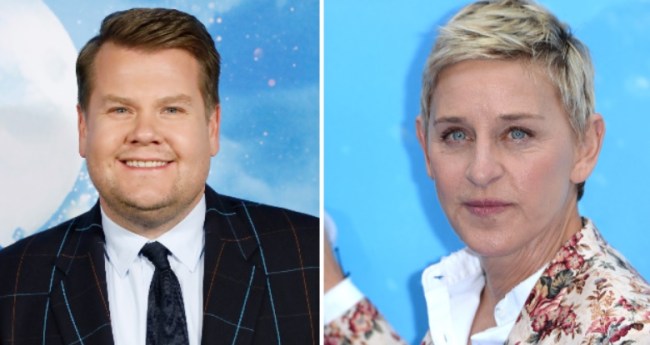 It seems like Ellen Degeneres is one her way out after many staffers complained of being subject to a ‘toxic” workplace culture while working on her show.

On Saturday it was reported that Ellen wanted to shut the show down as a way to preserve her brand in the long run.

“She feels she can’t go on and the only way to recover her personal brand from this is to shut down the show,” an insider told the outlet on Friday. “The truth is she knew what was going on — it’s her show. The buck stops with her. She can blame every executive under the sun — but Ellen is ultimately the one to blame.”

Now we’re learning that Late Late show host James Corden could be brought in to replace Ellen by TV execs.

Now insiders at the show’s network NBC claim that Corden, 41, was seen as “the long term successor” to Ellen long before scandal hit the seemingly squeaky clean host.

“James Corden was being eyed for Ellen’s job in the long term before any of this came to light.

“Now this shocking new development places a spotlight on the next step.

“James and his team have been trailblazers in modern TV, taking the once considered graveyard chat show slot into a cutting edge format with huge online, social media and global recognition.

The Internet thought it was funny Corden may replace Ellen considering he has somewhat of a reputation of not being a nice person in real life.

lol isn’t it an open secret that james corden is horrible to work with too https://t.co/3Shhw0A7ml

James corden replacing Ellen is the Equivalent to someone replacing coke for Diet Coke with their meal . You’re getting the same thing https://t.co/kCT9rc1pIR

That’s because it’s not a “line” it’s a circle with the same 6 people in it. https://t.co/5DHDNTSkEq

Good idea, everyone knows how nice James Corden is. The worst kept secret in Hollywood is how great of a guy he is. https://t.co/fMgDMPfleQ

Isn’t it pretty well known JC is just as bad as Ellen in many ways? A quick Google search returns some pretty scathing accusations of his workplace conduct. Plus, do we *really* need another middle-aged white guy on TV? Seems like an opportunity to hire someone more diverse 🤷🏻‍♂️ https://t.co/1z7ehcjsKT

One Toxic Replacing another Toxic. James Corden to possibly replace Ellen DeGeneres is beyond idiotic. pic.twitter.com/X3XJ6hIobx