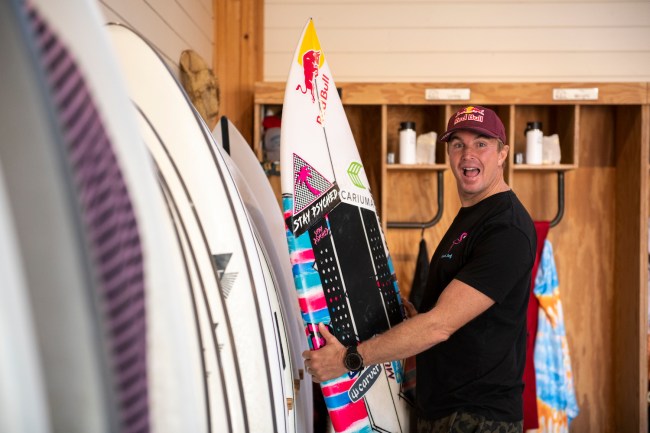 Remember when Mark Sanchez led the New York Jets to two AFC Championship games in the first two years of his NFL career?

Remember those fearless drives in the pre-butt fumble era? Like when the Jets beat the Patriots in the 2011 NFL playoffs? How dominate Sanchez was in the pocket the entire game?

Turns out all that mental and physical toughness translates pretty well to another sport:

Legendary surfer Jamie O’Brien is currently promoting Red Bull Foam Wreckers – “anti-surf-contest surf contest where only soft-boards are allowed and anyone can participate.” In partnership with Red Bull, the goal is a soft board surf contest that isn’t so technical, stuffy, and – dare I say it? – boring like most competitions.

“It’s not about being the best one out there, it’s about just being yourself and sharing the stoke of surfing with your community,” Gravvy adds.

The series kicked off in March, coming to 10 different beaches across the country until November 2022. 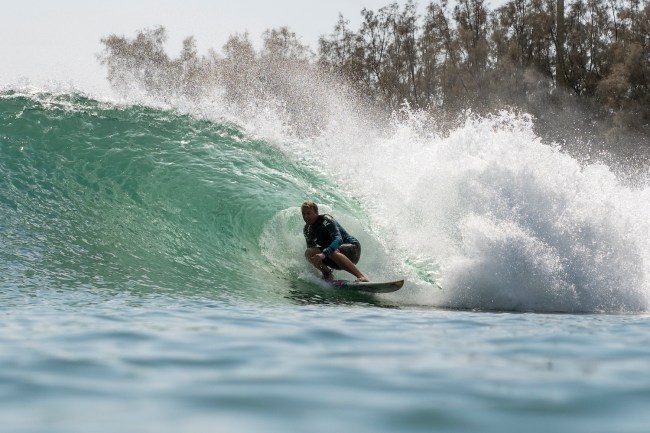 I got a chance to talk to O’Brien from his house in Hawaii about soft board shredding, as well as some of his recent surf life adventures.

Somehow or another, we ended up on the topic of what it’s like to surf with Mark Sanchez. The former USC quarterback is from Mission Viejo, California – right up from the legendary surf breaks of Dana Point and Laguna Beach – so it’s not that far of a stretch he grew up catching the occasional swell.

Now that you have that mental image of Mark Sanchez surfing in your head, hopefully it manifests into another iconic Rex Ryan tattoo.

So let’s talk about what you’re doing with Red Bull Foam Wreckers. What does the non-surfer need to know about the festivities?

Jamie O’Brien: I mean, really the non-surfer really needs to know nothing. They just show up and have fun at the event. It’s like, it’s the greatest surf contest that’s not a surf contest in the world. And that’s kind of like the whole theory behind it is like, because contests are generally perceived as very serious and boring at times. With Red Bull, we’re just trying to make the greatest surf event ever.

How did it come to life?

I think it’s one of those things in surfing – everyone is like, “Oh, this guy’s the best. And that guy’s the best.” And there were all these guys claiming they were the best at soft top surfing. So we were like, ‘all right there’s time to make a contest.’

‘Cause the soft top community grew so big that, there was nothing there for it. And the soft toppers are a bunch of people just letting loose in the surf. Surfing carefree. And so it was the perfect time to make a carefree surf contest. 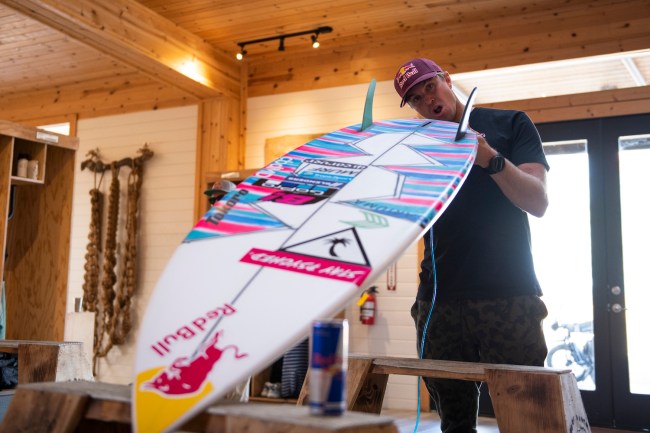 What kind of reception has it gotten so far?

People are really, really psyched. They’re showing up. I think the cool thing too is that they have team riders down there. They have Ben Gravy. They have Tyler Stanley. They have Tawny Rob, they have myself and the crew.

So it’s like all these people that they’ve watched soft top over the years, they’re finally getting to meet them and hang out and win free stuff. And basically, everybody that enters the contest wins something. So it’s all-around a really good feeling.

How did it go at the wave pool in Waco?

Yeah, it was pretty funny in Waco. I thought it was funny is you started having some pros fly in and you’re like, “Whoa, like you guys are settling down.”

They’re showing up trying to win the comp. And it’s the contest that’s not a contest. So the pros busted in huge air and then your average soft topper was just doing three sick turns and we’d throw the score the other way.

You know… Fluster ’em a little.

So besides Foam Wreckers, what do you got going on right now? What are you doing these days?

So right now we’ve kind of been locked down in Hawaii. Just hanging out in Hawaii, enjoying the summer weather. Fishing. A little bit of surfing. We scored some epic south swells about a month ago. That was great.

But now it’s kind of like, now we’re starting to think, alright I think it’s time to go to Indonesia. It’s time to go to Mexico or something like, we need to go do an epic surf trip and just kind of reset.

Where do you want to go?

I was thinking about going to Indonesia. Maybe we’re gonna go to maybe like Uluwatu area, go hang out and go get some epic waves and maybe jump over to one of the Natu Islands, as well, but all still up in the air.

We kind of got the whole month of July free.

Are there any bucket list items that you’re looking to kind of cross off this year? We’re kind of on the clock with the halfway point here. So anything you wanna get done before we go into 2023?

Nah, not really. I mean, I just wanna continue filming videos and just having fun and surfing. And life’s pretty simple but I just gotta get those videos across every Monday and make sure we’re kind of changing it up for the fans and the people that love watching the videos that way, I’m constantly entertaining them and not just staying at home.

On Surfing with Mark Sanchez…

Have you taken any athletes or celebrities out surfing when they’re in Hawaii lately?

Not really. It’s been pretty slow here in Hawaii.

We did link up with… was it Mark? Yeah. We linked up with Mark Sanchez. He was in Hawaii and I think he’s like a former NFL quarterback for 12 years.

He came down to our surf school at Jamie O’Brien surf experience and he had a football and he was throwing me the football off the side of the rock and I was trying to catch it on the wave. It was pretty cool.

Okay. So it’s interesting. He surfs a little stiff because he is just built like a brick. And the guy has the cardio of a tank. His cardio is like a tank, dude.

We got caught inside by some serious waves and he was taking some serious beatings and I was very worried for him.

He’s paddling out waves are breaking on him?

There were some gnarly ones that I was kind of worried about, because most people in this world would’ve been out of breath and needing air, but Mark Sanchez is a beast.

He didn’t seem that bothered by it at all.

That’s awesome. That’s a great story. Jamie, thank you so much for the time, man.