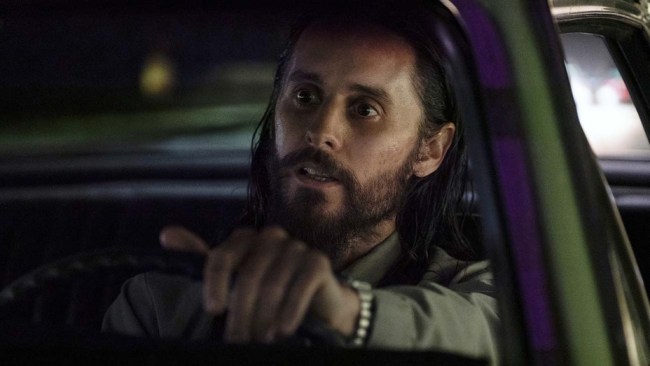 Ah, yet again, the fates of my rival and I have intertwined. But first, some history.

I am frequently dunking on Jared Leto. Ever since his turn as Joker in 2016’s Suicide Squad, it’s been a career mission of mine to exact revenge for that assault on the Church of DC Comics perpetrated by both Leto and director David Ayer. I also happen to find Leto to be generally overrated. Sure, he was willing to completely immerse himself into his Academy Award-winning role of Rayon, but that’s sort of just his thing? He’s a method actor, that’s what they do. And outside of Dallas Buyers Club, it doesn’t work out all that often. Tell me, how many Jared Leto movies have you, personally, actually seen?

Alas, last week I found myself watching the painfully poor Denzel Washington-starring crime “thriller” The Little Things, and one of my major takeaways was that… ya know what, Jared Leto ain’t half bad in this. Granted, his co-star Rami Malek (an equally if not more overrated actor) did all the overacting for him.

Then, as if my own consciousness had been hijacked, I paid him yet another compliment when Zack Snyder revealed a new look at his Joker in the upcoming Snyder Cut of Justice League. And how does the universe repay me? By giving Leto an absolute JOKE of a Golden Globe nomination for his The Little Things performance.

To Leto’ credit, even he seems shocked by the nomination, as he quite literally told The Hollywood Reporter that he wasn’t expecting it:

“I had trouble sleeping last night. I was tossing and turning. I went rock climbing yesterday in the mountains, and I think it was a bit restless from that. I finally got to bed — it was pretty late, so I slept in a little bit later. And when I woke up, I picked up my phone, I saw a lot of messages, and I thought, “Oh, I must be on a group chain or something.” But when I opened up the messages and I saw the nomination — I admit I was quite shocked. I didn’t really expect it. My mind is just not in that head space right now.” [via THR]