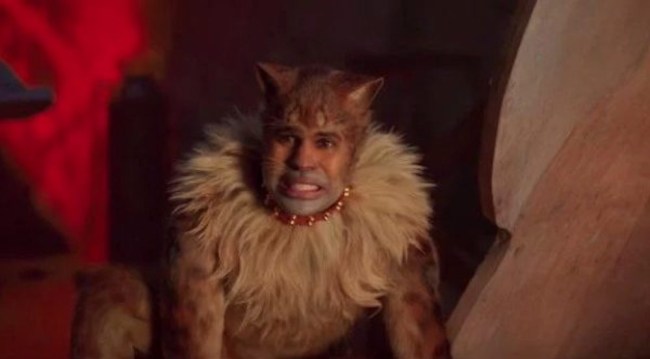 Can you name a single song by Jason Derulo without Googling it? Hand to God – I cannot. My first thought was, “Oh, Jason Derulo — yeah, of course, he’s the ‘going 90 in a 65’ guy” but then I realized, nope, that’s actually Akon and I’m just a completely out-of-touch elder millennial who’s losing grasp of his youth.

As it turns out, Jason Derulo is the “Mhmmmmmm whatcha say?” guy, which makes his recent revelation that he thought the abominable Frankenstein acid trip that was Cats would change the world make all the more sense. Only a guy who puts out music like that could have a thought like this.

“For the longest time, I was trying to figure out what’s the perfect first role, Cats checked all the boxes,” he said. “You can’t get a more start-studded cast, you don’t get a more respected director than an Oscar winner (Tom Hooper), and Rum Tum Tugger is a legacy role, a standout character in a classic musical … Even when I saw the trailer, I got chills down my spine! I thought it was gonna change the world.” [via The Telegraph]

Now, before you accuse me of being too harsh on JDR, here’s the “chills down my spine” trailer he’s talking about:

As a refresher for just how off-the-mark Derulo was: not only was Cats one of the most critically-and-pubically panned movies in recent memory, but it actually lost Universal Pictures over $113 million, which is truly a seismic L to take in the film industry.

Even if Cats wasn’t an objectively awful assault on the senses, when’s the last time a movie changed the world? Earlier this year, the Academy gave Best Picture to a foreign film (Parasite) for the first time ever and the world collapsed into chaos like three weeks later. Avengers: Endgame has probably been seen by over 30% of the planet, yet you don’t see North and South Korea signing a peace treaty because Tony Stark’s death made them both cry, now do you? And Derulo certainly wasn’t talking about Cats changing the world of filmmaking in a technical sense, as this sort of motion-capture has been used for over a decade now (yes, despite my utter hatred for it, props to Avatar, I suppose).

To be fair to Derulo, though, Cats did change the world in one sense: it was almost the first-ever motion picture to feature CGI’d cat buttholes.

RELATED: There’s A Version Of ‘Cats’ Out There Where All The Cats Have CGI Buttholes