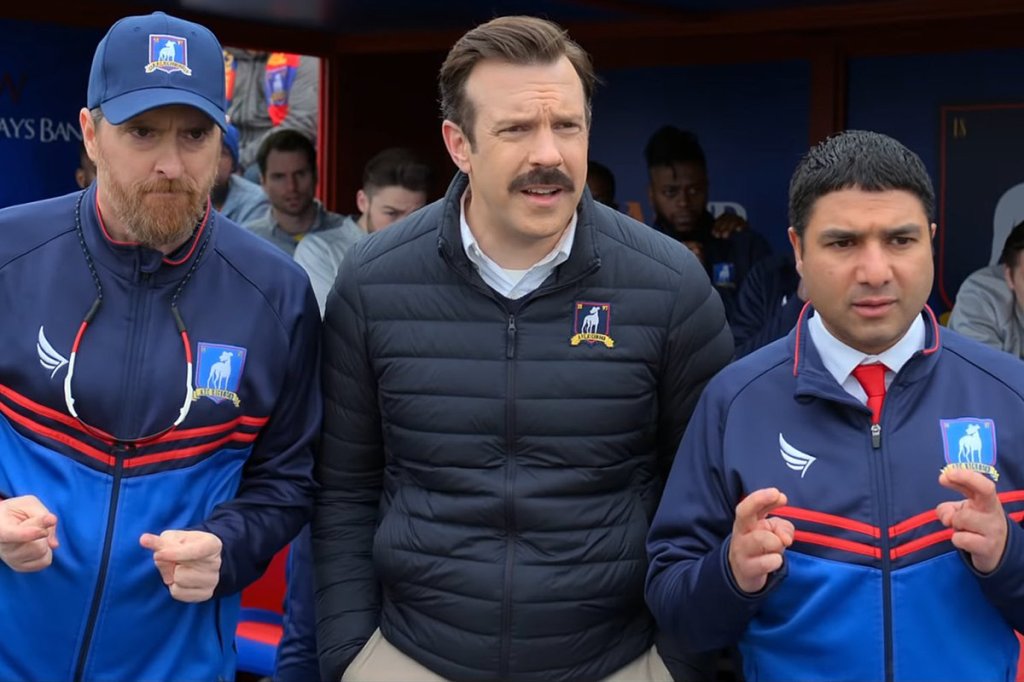 If you are a fan of either The Foo Fighters or Ted Lasso then you’ve come to the right place because you’ll love this story. If you aren’t a fan of Ted Lasso I will go ahead and assume you haven’t watched the show yet because nobody alive has given it a chance and didn’t like it. Not a single person. Zero. Zilch. It’s perfect.

Season 2 of Ted Lasso premiered on Apple TV+ last week. The series will do weekly episode premieres like traditional TV instead of the Netflix model where we can all binge-watch to our heart’s delight. And while we’re only one episode into Season 2 (so far) it’s already brilliant.

As you already know, Saturday Night Live alum Jason Sudeikis stars as the show’s lead character Ted Lasso. Jason’s a co-creator, writer, and executive producer on the show. And appearing on the After School Radio show with Blink-182’s Mark Hoppus, Jason Sudeikis shed some light on how ‘My Hero’ by The Foo Fighters was integral in shaping Season 2 of Ted Lasso.

Sudeikis told Mark Hoppus “when we were on SNL I would write a lot of sketches to music.” Then went on to explain how it wasn’t just writing while listening to music but they’d write entire sketches based on songs. “‘Oh, you know, this song reminds me of this, this song reminds me of that and then you go into that.’” He said they did ‘six or seven of those’ style sketches based on four dudes sitting around listening to a song but that trend was cut short because SNL didn’t want to keep paying for the rights to songs.

As for the ‘My Hero’ by The Foo Fighters connection, Jason Sudeikis said that he “felt that I saw a whole movie about that song. At least my interpretation of it. I’ve never spoken to Gus nor Dave or any of the guys in the band about what that song is about.” He went on to add (via THR):

“I knew what it is about for me and some of those themes are literally being used in season two of Ted Lasso, which I hadn’t put together until I put together this list. Just the idea of false prophets or don’t meet your heroes. Or the idea of like all statues have clay feet, I think is another example of that. People are human, you know, people are human.”

Jason says this doesn’t always happen with songs but when a song leaves a lasting impression on him he is sure to let that sink in:

“I pay attention when a song becomes a muse, whether you end up using the tune or not,” he said of his writing process. “I saw a beginning, middle and end to a story in that song for me. That was really profound at 21-years-old, 22-years-old, having just moved to Chicago to try this acting out.” (via THR)

I am semi-curious what we can take away from how Jason felt that ‘My Hero’ was the muse for season 2. He calls out people being human and never meeting your heroes which leads me to believe there’s some adversity in the near future for Ted and the others.

If you haven’t started watching Season 2 of Ted Lasso yet and are waiting for some episodes to build up so you can watch them back-to-back-to-back, I don’t blame you. It’s going to be incredibly difficult to sit back every week and wait for new episodes but if there’s any show that is worth waiting for it’s Ted Lasso.