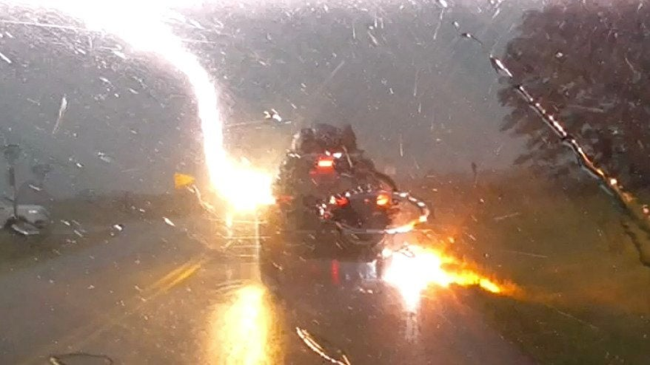 If you have ever been driving in a thunderstorm and wondered what it would be like if your car got struck by lightning, we can now tell you that it would be scary AF.

Dashcam video caught the frightening moment a Jeep Grand Cherokee was struck by lightning multiple times while driving down the highway north of Waverly, Kansas.

In the terrifying video, the Jeep Grand Cherokee appears to be hit initially by one bolt of lightning then three of four more times in quick succession, frying the SUVs electrical system. It also appears as if the lightning strikes may have flattened all four the vehicle’s tires as the Jeep drops down following the blasts.

The National Weather Service says that a lightning strike such as this can blow the tires, shatter windshields, and disable a vehicle’s electrical system.

The person who recorded the video, storm chaser Carl Hobi, wrote in the description, “Lightning strikes Jeep right in front of me while inside a Severe Thunderstorm Warning and Flash Flood Warning, just North of Waverly, KS. Married couple with a baby and 2 children under 2 years old. Everyone was safe.”

One can only imagine the shock this family experienced, not to mention how loud it must have been inside the SUV. From the vehicle following the SUV it sounds like a cannon went off.

“They were in shock and first thing they did was make sure the kids were ok and they were relieved that everyone was just fine,” Hobi told Newsweek on Instagram.

Thankfully, cars these days are built to withstand lightning strikes and protect the humans inside from the thousands of volts of electricity that can be generated by a strike such as this. Not that it’s good for your car.

“The car was dead and stuck in gear and we could not get it in to [sic] neutral to push off the road. It will most likely be considered Totaled,” said Hobi.

The Weather Channel discussed the lightning strike on one of their broadcasts and pointed out that while the claim about lightning never striking a car is obviously false, it’s still a pretty safe place to be during a thunderstom.