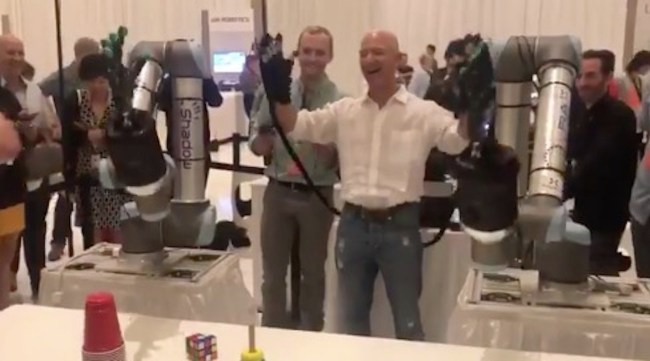 Of all the supervillains Jeff Bezos could’ve turned into, Doctor Octopus was definitely not the one I expected. The natural comparison, of course, has long been Lex Luthor: power-hungry and bald-as-all-hell business magnate intent on controlling the world with technology, you get the picture. Hell, I could even see him being a hairless Ra’s al Ghul, given that Bezos is currently the most likely person in the world to discover the key to immortality, whether that be through sheer scientific advancement or the discovery of the Lazarus Pit. But Doc Ock just seems so rudimentary for a guy like Bezos, who’s quite literally the richest man walking this planet. As Tom Hardy’s character said in Inception, “you mustn’t be afraid to dream a little bigger, darling,” and that’s exactly what Bezos has done here.

Now, all that said, that doesn’t make it any less terrifying. In fact, him starting off by becoming a ground-level villain like Doc Ock is perhaps even more off-putting as it could mean there’s room to grow. First, he masters the Octopus arms. Then, he gets the hang of Green Goblin’s glider before finally injecting himself with the Venom symbiote. For christ’s sakes, he even lets our a thunderous stereotypical villain laugh just 10 seconds into the video!

Nothing against @JeffBezos but this is the stuff of evil genius villians 🙃 pic.twitter.com/07y7bHPyTK

The problem with Jeff Bezos is that if he were to turn into a supervillain, I’m not sure there’s anyone who could stop him. Not many superheroes running around these days. Our best bet would be hoping that Mark Cuban either has unresolved demons that he works through by dressing up like a bat and beating petty criminals within an inch of there life under the cover of night, OR, got bored one summer and built himself a fully operational Iron Man suit.