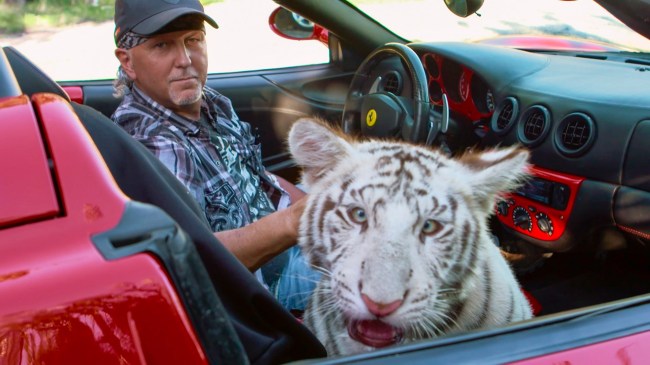 In Tiger King news, Jeff Lowe, now the owner of the Greater Wynnewood Exotic Animal Park, claims Joe Exotic’s team flew a helicopter low over the zoo he now owns thanks in large part to the fact that Mr. Exotic is currently serving time at FMC Forth Worth in Texas and has even filed a FAA complaint.

These people are never not going to be a part of pop culture news now. They just won’t let it happen. I mean, Joe Exotic’s legal team has its own hype video for God’s sake. And Carole Baskin is trying to get into Ariana Grande videos. It’s all so fantastic.

Now, someone, Lowe thinks its Exotic, flew a helicopter low over the zoo featured in Tiger King basically terrorizing the animals.

In doing so, the helicopter broke numerous laws including violating the the Endangered Species Act and violating restricted air space.

TMZ reports that Lowe got the helicopter’s tail number and it was the same number as the one featured in Joe Exotic’s legal team’s hype video.

Check out my dad and his legal team representing Joe Exotic 🐯 (and me in there for .2 seconds)

Joe’s rep, Eric Love, tells us … Team Tiger has no knowledge of the incident. Love says no one on the team was involved, and says the helicopter used for the video was one they chartered … it’s not theirs.

Of course, the whole thing raises eyebrows. As you may recall from ‘Tiger King’ … Joe once flew a helicopter over Baskin’s Big Cat Rescue park in Florida to check it out, which she also claimed caused the animals distress.

Joe would never stoop to doing something like that again, would he?