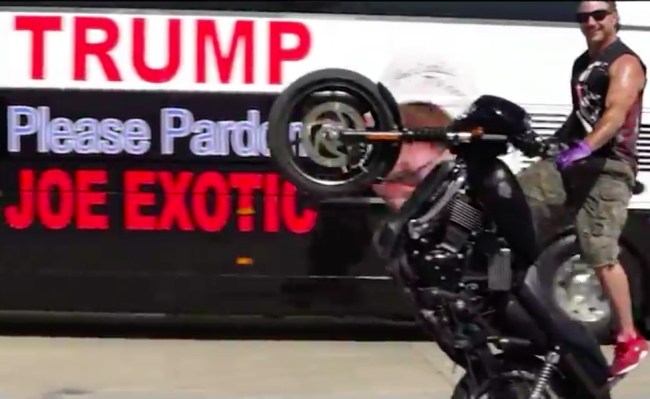 If you’ve seen Tiger King, then you know that there’s no way to accurately convey how truly insane the entire thing is unless you sit down and watch it yourself.

Sure, you can tell someone “There’s this crazy show on Netflix about a gay polygamist from Oklahoma who owns a private zoo full of tigers just like another guy in it who once served as a snake handler for Britney Spears and may also run a New Age sex cult at the zoo he runs in addition to the craziest cat lady in the history of crazy cat ladies who almost got killed by a someone who was hired by the first guy but didn’t because the hitman decided to use the money to go on a cocaine-fueled bender instead. Also, the former owner of a strip club randomly rides a jet ski in slow-motion while Eye of the Tiger plays in the background for reasons that are never really addressed.”

However, that doesn’t even come close to capturing the sheer absurdity of the entire saga.

Tiger King ends (and technically begins) with Joe Exotic in prison after being convicted of those murder-for-hire charges in addition to the animal abuse allegations filed against him. However, he made it very clear we hadn’t heard the last of him and it’s very clear we likely won’t stop hearing about him for quite some time if he has anything to say about it.

Exotic is currently serving the first year of a 22-year prison sentence, but shortly after the documentary series became the phenomenon it is, he sued the federal government for $94 million and announced his intention to angle for a presidential pardon from Donald Trump (who has suggested he may look into the matter because it’s 2020 and that’s just how things work now).

Earlier this week, we learned Exotic had assembled a legal team to assist him in his quest for freedom but didn’t know much about them aside from the fact they’re in possession of a bus with a giant message for Trump plastered on the side.

However, we now have a few more details about who’s taking up the case courtesy of what can only be described as a hype reel that his crack squad of lawyers and investigators put together to introduce themselves to the world and potentially lobby to become the stars of their own reality show in the process.

You’ll have to head over to TMZ to watch it but I promise it is more than worth it, as you’ll get to familiarize yourself with Eric Love—the walking Texas stereotype serving as the “Lead Investigator and Executive Manager” on the case—as well as Lead Counsel Francisco Hernandez as they fill us in on their background and legal strategy.

While there, you’ll also get to see the obligatory clip of a bald eagle flying to represent freedom, Love hopping out of a helicopter with a wrestling championship belt in his hand, and dudes doing wheelies in front of the aforementioned bus like they’re in the “Ruff Ryder’s Anthem” music video.

I can’t say I would’ve ever guessed who Exotic would tap to lead the charge for him, but after watching that, I can’t imagine any other crew taking this particular job.