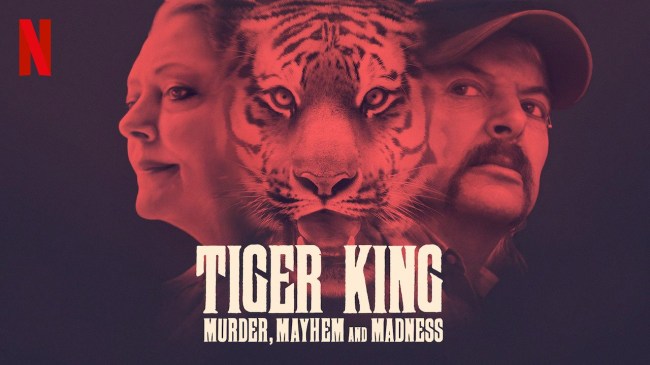 Because the world can apparently simply not get enough of the hit Netflix documentary series Tiger King: Murder, Mayhem and Madness, there is yet another new episode reportedly on the way.

This time, instead of focusing on Joe Exotic, Carole Baskin, and the rest of the usual suspects, the filmmakers are going to turn the lens towards the 2003 Tiger attack that put an end to the long-running Las Vegas act Siegfried & Roy.

The popular act which ran for 13 years in Sin City came to an end on October 3, 2003 when a 7-year-old white tiger dragged an unconscious Roy Horn, who may have had a stroke, off the stage by his neck after the performer passed out, severing his spine and causing massive blood loss, permanently imparing his motor and verbal skills.

Roy later claimed the tiger was only trying to drag him to safety after he passed out, but not many people agreed with that assessement of the incident.

Horn passed away on May 8, 2020 at the age of 75 due to complications from being infected with COVID-19.

Now, according to The Hollywood Reporter, Horn and Siegfried Fischbacher will be featured in a new episode of Tiger King.

Dr. James Liu, a wildlife veterinarian and field biologist who is the associate director of the Turtle Conservancy, contacted The Hollywood Reporter on Thursday, requesting contact information for Chris Lawrence, a former tiger handler for Siegfried & Roy’s Las Vegas show. Lawrence received national media attention in March 2019 when he was profiled in THR about his 15-year battle with PTSD following the infamous attack, which left Roy Horn permanently injured. (The handler, who was onstage during the mauling, disputed what he termed the pair’s “romanticized” narrative of what had occurred, detailing a mix of Horn’s own operational failures and errors as the culprit.)

During the brief call on Thursday, Liu — who indicated he also served as part of Tiger King’s production team — said work was underway on a follow-up episode, under the Tiger King name, that Goode Films hoped would specifically act as a higher-minded corrective to both the original seven-episode series as well as comedian Joel McHale’s aftershow special, the latter of which was not produced by the filmmakers.

Liu wanted Lawrence to respond to Siegfried Fischbacher, who, months after declining to speak for THR’s coverage, had rebuked his former employee during an interview with ABC’s Good Morning America. It was unclear how such material would fit into the suggested new approach.

Speaking to THR, a spokeswoman for Goode Films denied future Tiger King episodes would be “going in a more conservational route.”

Either way, it sounds like we haven’t heard or seen the last of Tiger King. Especially since the park recently reopened to big crowds, threatening to spread the coronavirus to the big cats as hundreds of people come in close proximity to them.

Related: Amanda Knox Says We All Need To Chill With The ‘Carole Baskin Killed Her Husband’ Jokes And Theories