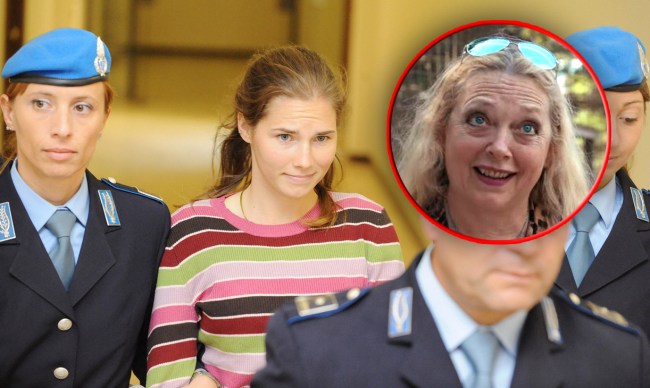 Carole Baskin of Tiger King infamy has a new ally in her corner when it comes to claims that she either killed or had her second husband Don Lewis killed the either fed to the tigers or numerous other theories that have been put forth. And her name is one that is very familiar to true crime buffs: Amanda Knox.

Knox, as you may recall, was convicted of the murder of Meredith Kercher, her fellow exchange student roomate in Italy, 13 or so years ago. She was since acquitted of the crime by the Italian Supreme Court. So Knox knows a thing or two about being wrongly accused of murdering someone.

Everyone from Joe Exotic to Doc Antle to her missing husband’s granddaughter Tiffany Lewis to O.J. Simpson has cast aspersions Baskin’s way, stating that they believe she was behind the mysterious and unsolved disappearance of wealthy big cat collector Don Lewis.

Lewis’ former lawyer Joseph Fritz recently even went so far as to say he heard Lewis was strangled from the backseat of an airplane over the Gulf at 50 feet and dropped out over the water.

A crazy accusation to be sure, but that claim and numerous others have caught the attention of the Sheriff of Hillsborough County in Florida Chad Chronister.

Not so fast though, says Knox, who recently co-wrote an article on the subject for Crime Story.

…while these flawed, felonious figures ultimately come off as tragic or amusing, there’s been a more hateful response to Carole Baskin, the self-righteous owner of Big Cat Rescue, who devotes her days to caring for big cats and wistfully chuckling at the thought that she murdered her ex-husband, pushed him through a meat grinder, and fed him to the tigers.

I wouldn’t fault you for thinking any of these things. I came away from the docuseries feeling the same way about these people. It certainly seems that Carole Baskin had a hand in her husband’s disappearance. The police reports, that altered power of attorney, the way she laughs…How could she not be guilty?

That’s the million dollar question and one everyone wants answered, Amanda.

Knox goes on to discuss Baskin’s response to the docuseries, how the directors of her Netflix docuseries compared in how it was created, and a TikTok video that went viral in which one of the lyrics are “Carole Baskin killed her husband.”

I don’t know if Carole Baskin killed her husband. I do know that one documentary, from one directorial point of view, is insufficient evidence for me to write off another human being (not a character) as a killer. By all means, let’s investigate further. Let’s let Carole Baskin have her day in court, if the evidence warrants a trial. But let’s be careful with the impulse to think that we know all the facts and are qualified to pass down judgment because we sat in our pajamas, day-drinking and tweeting during quarantine, while we binged a docuseries on Netflix.

In the meantime, for you dancers out there, I wrote you some new lyrics (which I have posted as a TikTok lyric video here). I’d love to see your moves.

That’s right, cool cats and kittens. They key takeaway here is… Amanda Knox is on TikTok.