Doc Antle Of ‘Tiger King’ Fame Talks About His Time Working With Britney Spears: ‘Such A Darling’ 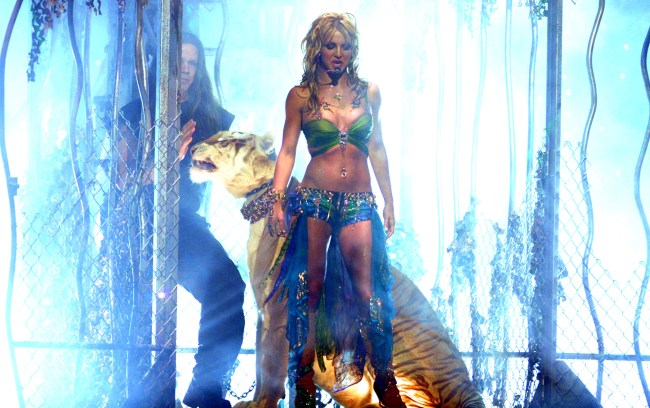 The self-isolating world was stunned last week to find out that none other than Doc Antle of Tiger King fame (infamy?) was on stage, with a tiger, during Britney Spears’ iconic MTV Video Music Awards performance of “I’m a Slave 4 U.”

This revelation about Antle working with Spears certainly had Britney fans shook.

Related: David Spade On Why He Couldn’t Play Joe Exotic, Even Though The ‘Tiger King’ Star Wants Him (Or Brad Pitt) To Do So

Antle was also apparently shook with how he was portrayed in the popular Netflix documentary, writing an Instagram post defending himself and calling the series, among other things, a “sensationalized entertainment with paid participants.”

A few days ago, Antle was interviewed by Entertainment Tonight and discussed Tiger King and his time working with Britney Spears.

“She was such a darling, totally just a fanatic person wanting a perfect performance,” Antle told Lauren Zima. “We were there for several days rehearsing so that the tigers would be relaxed and happy to be out there and that everything could be smooth and taken care of as best as possible. She was there rehearsing and working — just the hardest working, sweetest young girl, out there making all the pieces click together.”

Related: Local TV News Reports About Joe Exotic And Carole Baskin From 2017 To 2019 Are Like A Wormhole Filled With Crack

When asked what was going through his mind during Spears’ performance, Antle replied, “I have total confidence in that tiger. I knew him since he was a baby. He’s about seven years old right there [and at the] peak of his game. A super macho, aggressive male tiger. That’s the tiger that you go somewhere like that with because he cares less about the fireworks, the gas explosions, the banging music. He’s totally concerned with just holding his own and being cool.”

“He’d always met women in his life — because there’s so many women trainers that raised him from a cub and hung out with him — so he just thought Britney was one more friend,” Antle continued. “She petted him and was hugging on him and hanging out there with him.”

He also added, “It was all a grand time,” and invited Spears to visit his park.

“Brit knows who we are and where we are,” said Antle.

Related: ‘Tiger King’ Joe Exotic Had A FIFTH ‘Husband’ Who Didn’t Appear On The Show That’s A Murderer And Pedophile