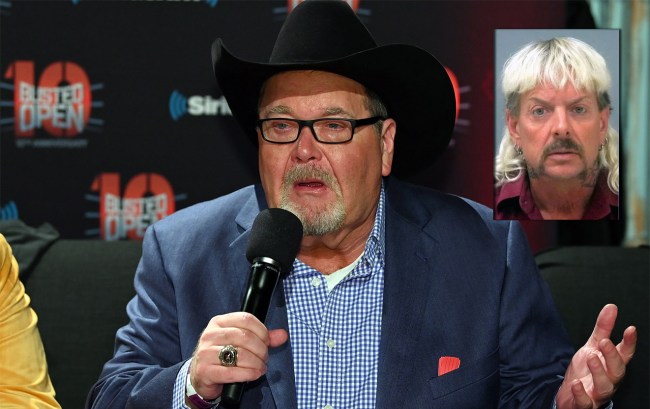 Much like what seems like the entire free world, Hall of Fame wrestling announcer Jim Ross has also now become familiar with one Joe Exotic thanks to the ultra-popular Netflix documentary Tiger King: Murder, Mayhem and Madness.

Ross, who loudly and proudly hails from the great state of Oklahoma, recently appeared on Sports Radio WFNZ in Charlotte to talk about the impact the current pandemic is having on wrestling (which was pretty fascinating), but since J.R. is from Oklahoma the hosts had to ask him about Tiger King.

What they got was one of the best takes we’ve heard yet about the show and his fellow Oklahoman Joe Exotic.

“I think those sumbitches are Texans that just slipped across the Red River and infiltrated out territory,” Ross joked, not wanting his state in any way to be associated with that crazy cast of characters.

“I didn’t know that guy,” Ross said, referring to Joe Exotic. “He reminds me of a failed independent wrestler who cannot get booked and he blames it on everybody else… because of his bad knee, bad elbow, the prejudice of the booker. He’s an idiot and now there’s GoFundMe pages to get his ass out of prison. Can you believe that?”

Guessing Ross never visited the Greater Wynnewood Exotic Animal Park in Wynnewood, though I do wonder what he thinks of The Undertaker and Michelle McCool’s involvement with Doc Antle.

J.R. also, being a diehard Sooners fan, of course managed to slip in a swipe at Oklahoma State supporters when the hosts suggested Joe Exotic might be a part of their fanbase, “Might be. He kind of fits that mold.”

Take a listen to the entire segment with Jim Ross below…