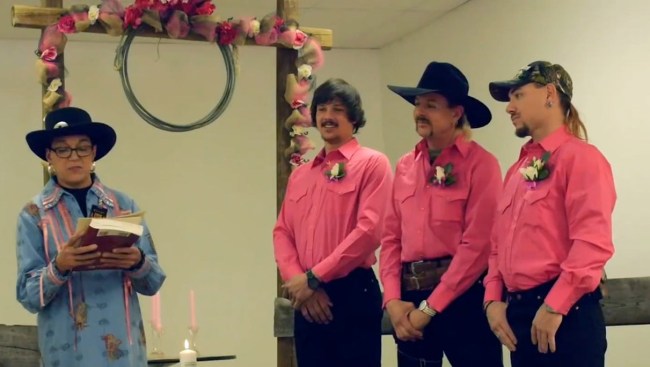 By now, it seems pretty much everyone knows all about the Netflix documentary Tiger King: Murder, Mayhem and Madness and the crazy cast of characters involved in the world of big cat collecting, including the star of the show Joe Exotic.

However, the list of things we did NOT know, but have since learned about Joe, Carole Baskin, Jeff Lowe, Doc Antle, and the rest, could have easily filled another two seasons worth of episodes.

The latest crazy addendum to Tiger King comes in the form of a fifth Joe Exotic “husband” who did not appear in the docuseries and sounds like a real charmer.

We know all about the bizarre journey of John Finlay, the sad case of Travis Maldonado, and Joe’s latest love Dillon Passage. We also briefly heard mention of Joe’s first “husband” Brian Rhyne, who passed away due to complications related to HIV.

Now, it turns out, Joe Exotic had a “husband” in between Rhyne and Finlay named Jeffrey Charles “JC” Hartpence.

According to a 2019 New York Magazine article on Joe, Hartpence once held a gun to Joe’s head in a drunken rage, leading to their breakup, and is now serving a life sentence in a Kansas prison for the 2014 murder of a man named Curtis Shelton.

The Mirror also reports that Hartpence was also convicted for aggravated indecent liberties with a child under the age of 14.

Robert Moor, who runs a podcast about Joe Exotic and revealed the restraining order filed against Carole Baskin by her boyfriend following the disappearance of her wealthy husband Don Lewis, has also mentioned the possibility of a sixth “husband” named Paul, who New York Magazine also discussed.

While dating John, Joe seduced a young man named Paul (who asked me not to reveal his last name). Paul was quiet, withdrawn, a fan of Insane Clown Posse. He (like John and J.C.) doesn’t identify as gay. Joe, John, and Paul all slept in one bed, with Joe in the middle.

By my count, he had at least four: Brian, John, Travis, and Dillon. There was another guy—a juggalo, who asked me not to reveal his name—who lived with Joe and John. One day Joe gave him a ring, then later said “That was a wedding ring. We’re married.” Not sure if that counts.

More recently, Joe Exotic was placed in coronavirus isolation in prison while he awaits word on the Presidential pardon he requested from Donald Tump.