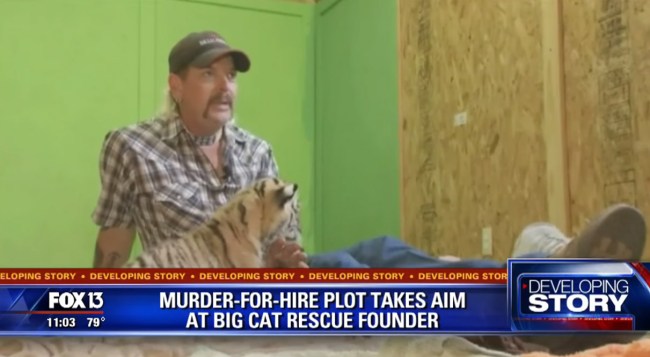 With so many insane and intriguing stories coming out following the release of the Netflix documentary Tiger King: Murder, Mayhem and Madness – Don Lewis’ granddaughter taking to TikTok accuse blame Carole Baskin of murdering him, the sheriff in Florida who is reinvestigating the case, Baskin’s ex-boyfriend revealing he too tried to get a restraining order against her, Jeff Lowe’s nanny saying she wasn’t really his nanny, Britney Spears having ties to Doc Antle, Joe Exotic not really singing any of those songs he’s so proud of – it got me to wondering just what exactly the local media was doing as all of this was actually taking place between 2017 and 2019.

Because once I started looking for, and watching, local TV news reports surrounding Joe Exotic and Carole Baskin I found myself down a wormhole that I thought I might never make it back from.

It all began with this 2012 CBS News report on exotic animal owners that features, you guessed it… Joe Exotic.

Which led me to this local news report by KOCO 5 News featuring an interview with Joe Exotic talking about his run for Oklahoma governor.

Then I ran into these local TV news reports from 2017 by KOCO 5 News about the unfortunate death of Joe Exotic’s “husband” Travis Maldonado, including one video in which Joe talks to the local news reporter about Travis’ death one day after it happened.

Here’s a news report by FOX 13 News-Tampa Bay from 2018 about the bizarre murder-for-hire case that was at that time still a “developing story.”

Here’s another 2018 news report on the murder-for-hire case, this time by WFLA News Channel 8.

News 9 in Oklahoma City really went to town with their 2018 reports by covering the trial, focusing on Joe Exotic’s claims that he was being framed, and interviewing Joe’s former campaign manager Joshua Dial.

They also did several reports on the trial itself, including clips of videoused in Joe’s trial and an interview with the man he hired to kill Baskin, Allen Glover (who at that time was still remaining anonymous).

News 9 also did a report on the man who took over Joe Exotic’s zoo, Jeff Lowe, being the subject of an arrest warrant in Las Vegas while Joe himself was actually on trial.

And just to top things off, here’s a video from April 2019 that Carole Baskin herself posted to the Big Cat Rescue YouTube account following Joe Exotic being found guilty of all 19 federal charges made against him.

There’s more. A LOT MORE. But I truly can’t watch anymore of these (for now). If you do, well, you know where to go next.