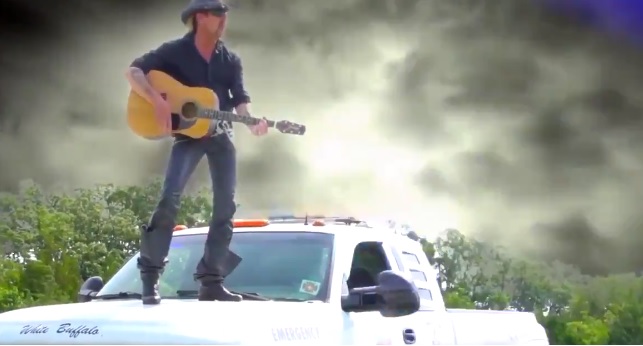 Netflix’s Tiger King is the most talked-about show during quarantine and Joe Exotic has become a star despite being behind bars for his participation in a murder-for-hire plot.

With all the crazy twists and turns on the doc, the most shocking development is that Joe’s songs that are featured on the show are pretty damn good.

i saw tiger by joe exotic will be the first dance song at my wedding #TigerKing pic.twitter.com/L0KJanei03

joe exotic writing a song & making a music video about how his enemy killed her husband & fed him to the tigers is the level of petty i aspire to be #TigerKing  #JoeExotic  #CaroleKilledHerHusband #CaroleBaskin #HereKittyKitty 🐯🦁 pic.twitter.com/2HX5WhsY3K

Unfortunately, it appears that Joe Exotic can’t sing at all and has been duping people for years. In an interview with Rick Kirkham, who was the producer of Joe Exotic’s reality show and was featured on the Tiger King, talked about how Joe doesn’t actually have any musical talent and can’t even hold a tune.

“It was absolutely ridiculous,” producer Rick Kirkham told Vanity Fair of Joe’s music ruse. Kirkham spent years living on Joe’s now-shuttered zoo, filming footage for a prospective reality show. “One time,” he said, “Joe got a little bit drunk and high, and we actually coaxed him into singing part of one of the songs. He couldn’t even hold a tune. It was just so ludicrous. It was a big joke within the crew and staff that it wasn’t him [singing in the videos]—but he was damned insistent to anyone and everyone, including us and my studio crew, that that was him.”

Vanity Fair went on to learn that all of Joe Exotic’s songs were written and performed by duo Vince Johnson and Danny Clifton who agreed to work with Joe for free in exchange for exposure their music was going to get on a potential reality show.

After some light internet research, Vanity Fair concluded that the mystery musicians responsible for Joe’s tracks are Vince Johnson and vocalist Danny Clinton, both of whom are listed in Tiger King’s credits. But Joe guarded this “secret” fiercely.

Joe contacted Johnson, explained that he was a large-cat owner operating a private zoo in Oklahoma, and said he needed music for a reality show that was the subject of a bidding war between Animal Planet, Discovery, and National Geographic. Johnson agreed to work pro bono in exchange for the potential exposure his music could get on cable TV.

Apparently, Johnson and Clifton had no idea that Joe Exotic was going to lip-sync and pass the songs off as his own. Johnson says he was pretty pissed when he learned that Joe was straight up taking credit for songs he didn’t sing or write.

I had no idea he was going to Milli Vanilli the songs,” Johnson wrote Vanity Fair in an email. “It was a couple of months and two or three songs [into the collaboration] when I was on YouTube one night and just happened to look up Joe Exotic. And there he was, lip-syncing and acting like the ghost of Elvis [in these music videos]. I called him up, I was hot…And he bamboozled me about his reality show—that it was coming soon and he would make everything right as rain. I just wanted the proper credit.”

Considering everything we know about Joe Exotic it really isn’t that shocking that he would lie about singing his own songs.